Islands of Wakfu is an action adventure game based on the Wakfu universe coming to the Xboxlive arcade.

I've been playing the Wakfu beta and upon checking the site, I found out that they have an Xboxlive arcade game currently in development.

Developed by Ankama Play, the game has been in the works for a while but the release date is still to be announced.

Here is the gameplay trailer. It appears you control a Girl named Nora and are assisted by her dragon brother Efrim.

The last of the ultra costume packs is out today. Make sure you finish off your collection.

The costumes cost 320 microsoft points on xboxlive and $4 on the PSN.

The video below has last week's costumes as well, so the new ones start at about 0:32.

Daigo has just ended his Madcatz sponser contract. Find out what he's going to do next.

Daigo "The Beast" Umehara decided today that he was going to quit playing Street Fighter and fully pursue his nursing career.

"Video games are for kids and you should all just grow up" Daigo said after he won his last tournament . The last anyone has seen of him was him leaving the tournament and flipping everyone off while doing so.

Since I'm not going to use my beta codes, I'm just going post them here.

I don't want to give my codes to just anyone so I'm going to post mine here.

Armagetron Advanced: A Tron lightcycle online game and it's free

Find downloads on the side bar and choose which version to download depending on your computer.

It's got online multiplayer, it's customizable, and you can host your own server, all for free. It's a simple game so it has a very quick download and small file size too.

The premise is everyone has a speeder bike. The game is a few years old and was based on the first Tron movie so the bikes move on 90 degree turns (except not on all servers). In the most basic mode, everyone is just trying to kill each other by outmanuevering opponents and forcing opponents to run into a wall. There are other modes such as fortress where you try to capture the enemies base by occupying it while you or your teammates defend your own base. There are a variety of other modes such as capture the flag or races because all the content is user created.

There you have it. It's free downloadable game so try it out if you want.

The music is that Nanana song from My Chemical Romance but I'm hoping it's just a promotional song and the traditional music from Sonic Adventure 2 stays intact. Plus at the last 3 seconds, you see Sonic flying through Spagonia, a level from Sonic Unleashed. But if there's any level from Unleashed I want, it would be Apotos.

And here's an interview with one of the devs that I wanted to post a while ago.

Egoraptor hilariously reviews Castlevania 2 and contrasts it to the original Castlevania.

Egoraptor, creator of the Awesome series and just a great and funny flash animator, just released a review video of Castlevania 2: Simon's Quest. Expect hilarity. Also, there's a lesson on gaming in general at the end of the video.

A rumor circulating the net reports that Wal-mart will drop the price of the 3DS three days earlier than expected.

Wal-mart is supposedly going to drop the price of the Nintendo 3DS on August 9th, three days earlier then the official date of August 12th. What this means is that anyone who picks up the system on the 9th through the 11th can get the price reduction and still qualify for the Ambassador's program that Nintendo has announced. Also, if they release an ad or something, you might be able to get a price match at a preferred retailer if you want, basically being able to choose if you want to buy at Best Buy or whereever if you want points for rewards programs.

Here's the source. All the guy says is that he has a trusted source, but apparently he's held in high regard by his peers.

I honestly hope that it is either false, or if it is true, Nintendo does something about it. I know it's not very "bro-status" of me to think like this but I paid full price on day 1 and I don't like the idea of all these people getting two bonuses instead of the one bonus that all the people who've already paid full price are going to get. Anyway, that's how I feel about the situation.

I played the first one and very much enjoyed it. See how I feel about it sequel. 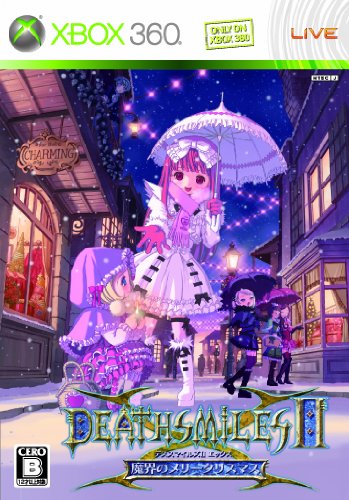 So, here's what I got out of the story. Satan Claws (Evil Santa) possessed a 7 year girl and used her to kill Count Dior, the caretaker of these lost child "Angels" in a spirit world. Apparently, Satan Claws wanted some magical music notes he had in his possession, to do something sinister I'm guessing. The girls he looked after have to go after Satan Claws and get these notes back. Of course, the text and cut-scenes were all in Japanese so I just took my best guess at the pictures of the cut-scenes. But this game is a shoot-em-up so the story's not important anyway.

The game is a classic horizontal side-scrolling bullet-hell shooter. Enemies come from all sides of the screen and you can shoot to the left or right. There's six different characters to choose from with each one of them having a different shooting pattern and a familiar with its own shooting pattern. There's four separate modes included. They are Deathsmiles 2X mode, Arrange mode, Arcade mode, and Extra mode. The first three modes are the main bullet-hell game while the Extra mode is more of a fun little mini-game. The difference between the first three are that each one plays a little bit differently gameplay wise.

Arrange mode lets you shoot enemy bullets to destroy them, and it also doesn't have bombs, so instead of bombs, it surrounds your familiar with a zone that neutralizes bullets and shoots him across the screen to clear the area of the bullets. There's also an in-game counter that goes up when you collect items from fallen enemies. If the counter goes to 1000, the game goes into a slow-mo "High Tension" mode. During this time, enemy bullets stay on the screen longer and the screen gets so crowded that you have to use your bomb zone familiar to even stay alive.

In Arcade mode, you play an exact port of the arcade version (no duh) which isn't as fully complete as the other modes. So that means it doesn't have two of the old characters (Rosa and Follett), and two of the stages found in the other modes (one of the main stages and the extra stage). I noticed that some of the bosses have different patterns as well.

Deathsmiles 2X mode is the standard mode that basically plays like the first Deathsmiles. You should probably start here if you play it.

Extra mode is a little platformer mini-game where you play as one of the girl's familiars and you bounce your character across a level into a spot on the stage which will take you to the next level. The familiars are only unique in the fact that they have different weights and bounce at different heights.  It's not a very serious mode but it is a fun little distraction. This mode is also based off of the first game. It plays the first game's music and some of the backdrops from the first game are used. Pretty nostalgic.

Overall, the gameplay is basic bullet-hell and provides the difficulty that is commonplace for these sorts of titles. It's very fun if you enjoy a challenge.

The music in this game is great. It has a very diverse soundtrack with Christmasy overtones that spans from metal to orchestral music and it all fits together perfectly.

I thoroughly enjoyed this game and its predecessor. It's a shame not many bullet-hells make it over to the U.S. This game was a special case since it was released directly to Games on demand. If more developers used this system they could release games without having to pay for localization, manufacturing, shipping, etc. So anyway, what I'm trying to say is...

You can't really rent it anyway but its only $30 which is cheap for a retail game, and it's downloadable so you don't have to drive anywhere too.

Remember the SF cartoon? It was terrible. Here's about 35 minutes of it.

These are videos from the Street Fighter cartoon edited by the youtube user theswitcher. He's also remixed the Mortal Kombat cartoon, darkstalkers, and even Fatal Fury.

There's parts 1, 2, hd remix, and hd remix turbo and they're listed below in order.

The third patch was released today so that means new character and apparently new gameplay mechanics.

When I saw the news this morning, I was only expecting the new character, but apparently, this update brings us really close to what Blazblue Continuum Shift II is in terms of gameplay and balance. This official trailer shows it all.