With a game like this it's all in the details, and if you're anything like me you're waitnig for them all.

You have to respect loyalty, they will be keeping the main series on the PS3.  SOUHEI NIIKAWA also mentions animating the characters as being a focus since Disgaea 3, that makes this even better.  TENPEI SATO says there are 40 to 50 tracks this time around, and with any Jrpg you know the music pretty well after a few hundred hours of game play.

I can't say it enough, I LOVE this series, if you haven't tried it you need to.  There is some solid Final Fantasy Tactics gameplay, some incredible characters, a story worth following, and more jokes than you'll know what to do with.

Best line ever "He knows my secret weakness, sexy big breasted women, but flat chested girls like you have no effect on me." Smack!!!  I'll never get tired of it.

Is Final Fantasy XIII the end of JRPG in America?

I'm sure there are still quite a few fans of the genre here in the states, but I can get my RPG on in a much more digestible form these days.

I've played many Japanese role playing games (JRPG) in my life. I count a few of them as some of my all time favorite games (Final Fantasy III, Dragon Warrior, Final Fantasy VII). JRPGs were really all I had back in the day as far as RPGs go, and really as far as stories went, because the action/adventure/shooter games of that generation had very little in the way of story (you were usually just given some brief guide to the world in the manual).

I played about 8 hours of Final Fantasy XIII. That was too much for me. These fantasy worlds with gunswords and pointy hair are getting a little played out, and I have no idea what's going on half the time. Couple that with the fact that the first 2-3 hours of battles are played using only one button and I was not impressed. Sure the cut scenes look great, but they have since the PS1. Then there's the way you choose your character's skills in the Crystarium, I ended up flipping the damn thing over and around so bad that I had to exit out and come back in to figure out what was going on. Can I have a simple menu please? I think that nicely illustrates the essence JRPG experience for me; there is so much emphasis on style that the creators forget to make the game FUN.

Don't even get me started on the 10 minute cut scenes after every 3 minutes of game play...

Rise of the Western (RPG that is)

With more recent games like Star Wars: KOTR, the Mass Effect series, Red Dead Redemption, and even some first-person shooter games that are now layering in RPG elements (see Borderlands) the American gamer has a lot more to choose from to get his RPG fix. This is especially true when you consider the migration of some of the more serious RPG gamers to MMOs like World of Warcraft.

The Western RPG is really a different animal than the JRPG when you think about it. There's a much bigger emphasis on action than on story, which I like because the JRPG stories don't make any fucking sense to me anymore. I'm not sure they ever did, but it sure seems like I understood them when I was a kid. I love the depth of the story in games like Mass Effect and how all the background details of the universe can be discovered, but even non-RPG games these days have some serious story, a trend that started with games like Half-life and Halo and continues on in just about every game today. Two of my favorite games from 2009, Batman: Arkham Asylum and Uncharted 2, are both excellent examples of this. There's hardly any RPG to them at all, but there's a ton of story and cinematics. I've mentioned to my friends many times that the story from Star Wars: The Force Unleashed is probably my favorite Star Wars story (easily better than any of the movie prequels and in my mind better than most of the original trilogy).

I'm looking forward to the new MMO, Star Wars: The Old Republic and to Mass Effect 3 and any number of action games more so than I am a future Final Fantasy game. I'm not sure where the JRPG goes from here, they definitely need to branch out into different settings. As Mass Effect so neatly illustrates, not every RPG needs swords.

I'm sure there are still quite a few fans of the genre here in the states, but I can get my RPG on in a much more digestible form these days.

Breath of Fire 4 heading to PSN

There are so many great series that are worth replaying or trying out if you've somehow missed them, Breath of Fire has a spot on that list. 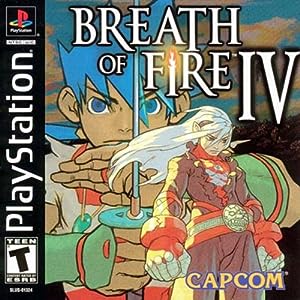 If you were a fan of the series you'll be hyped to see it showing up on PSN August 16th.  If not read on and you might decide to give it a try.

Your main character it Ryu, a badass who can transform into dragons.  He is out to stop this immortal evil emperor from destroying the world.

Like any good jrpg you will collect a team that brings their own flavor to the fight.    And these characters are more than just canon fodder.  You also get a great soundtrack that is more than just background music.  The score is epic and helps you get into the story as it builds.    The graphics are pretty dated so maybe if we are lucky they'll clean them up a bit.  But this game is a must buy and hopefully they will put a fair price on it.

I hate that the computer I'm using now has so many issues because I really want to get more into the story, but it's crashed on me twice already.

So if you are a fan of rpgs and have that chance buy it Jimmy!

Just a brief blurb letting you know what's coming up.

I've had a lot going on lately.  Hospital trips, family deaths, school...the list goes on.  But I've also been busy playing games, and I'm glad to report that I've got some items in the pipeline.  One of the things I'm getting lined up is my MMO Report, an article I'd ideally post every couple weeks outlining the MMOs I've been playing and what I've done...maybe some gameplay videos or screenshots to go with it.  I'm also working on my first JRPG Corner article, which is a sort of editorial piece outlining whatever I'm thinking about that has to do with the JRPG scene.  I'd also like to do a few retro reviews if time's permitting and I come up with good old games to review.  If you've got any suggestions for retro games (PS1 or earlier) that you think I might enjoy or should just check out, let me know if the comments.

See ya on the flipside.

JRPG Corner #1: Is a JRPG really a JRPG?

JRPG (Adjective) A role-playing game made in Japan

It's a feverish debate.  It's a much-hated debate - by myself included.  It's a pointless debate.  It's an argument of semantics and nothing more.  And if you've adamantly engaged in it, I feel that I can justifyably say that I can't stand you.

It's the debate over rather or not the JRPG is a genre.

Let's look back at one of the earliest JRPGs.  Dragon Quest (Dragon Warrior in the States) was released on the NES in 1986 (although it would be 1990 before it's US release).  Anyone that played Dragon Quest will remember its random battles and turn-based combat; even if you didn't play it, you'll expect to find such things.  They're iconic.

(Fight, spell, run, item...where have I seen that before?)

That's a JRPG, right?  But would you be surprised to learn that some of the earliest WRPGs also included them?  Wizardry, released in 1981 on the Apple-II and developed by American company Sir-tech, also included random battles and turn-based combat.

Let me reiterate that that's from 1981 - five years before Chunsoft and Enix came out with Dragon Quest.  So Dragon Quest wasn't really so much an innovation as a...copycat.  Yes, I said it; early JRPGs were ripping off gameplay from the early WRPGs.  I love JRPGs, but it's true.

Elder Scrolls: Arena, released in 1994, was part of the first wave of WRPGs to change the paradigm.  There were no random battles, there was no turn-based combat, and the game was much more free-form than previous WRPGs.  And now a distinction was starting to become apparent, because JRPGs were sticking to their roots.  Final Fantasy VI (Final Fantasy III in the States) released on the SNES the same year, and it followed in the ways of its forefathers.

(My how times haven't changed...but surely it will soon.)

Let's fast forward a bit so this doesn't become a boring history lesson, shall we?  How about to 2009, when a little game called Demon's Souls was released.  For the last few years WRPGs had really found their stride with games like Fable, Elder Scrolls IV: Oblivion, Knights of the Old Republic, Mass Effect, and Fallout 3.  Demon's Souls was developed by From Software, a Japanese developer whose notable past releases included Armored Core and...