There's a rumor floating around that the Xbox 360 version of Mortal Kombat 9 will feature it's own exclusive content, such as: Puzzle Kombat, The Pit 360 stage (remake of the Pit III from MK3) and King of the Hill Mode with avatar support.

Hitting gaming forums left and right is a list of supposed Xbox 360 exclusives for Mortal Kombat 9. NetherRealm has since added to following notice to their forums: “It has recently been brought to our attention that a number of members are openly discussing news and media that haven’t been officially announced by NetherRealm Studios.” There is no certainty to these exclusives so take them with a grain of salt:

if this is true then this is pretty fucking sweet because i was bummed out about the whole PS3 exclusive kratos.

hit the link for more info......there is even a pic to help support this.

let me know what you guys think dont be a jimmy!

177 reasons to check out this amazing game.

Radiata Stories, can be summarized in one word. Huphenexfun. What's that mean, you might ask. Humorous, phenomenal, excellent, and fun. All in one word. Revolutionary, right? Yes, just like Radiata Stories. Well, enough with my obsession, let's get started, shall we?

Graphics - The graphics in this game, as in any tri-Ace game, are amazing. Character models are smooth, landscapes are detailed richly and painted with many different colors. Appearance changes when you equip different armor. Every character is detailed and have specific little facial features and whatnot, making them distinct.

Story -  The story is lacking, but its still above average compared to some of the crap I've seen before. The story follows a young boy, Jack Russell, and his misadventures and accomplishments. As the game starts, Jack is a very immature boy, and he is conceded as well. Meeting with the other two main characters in the game in the first 10 minutes (Ridley Silverlake, Ganz Rothschild), he immediately gets cocky with Ridley and slightly disappoints his captain, Ganz. Some events unfold, and Ridley has a ritual performed on her that has never been performed on a human before by the Lord of the Dark Elves, Lord Nogueira, to save her life. Eventually, Jack must pick a side to follow, the elves, dwarves, goblins, and orcs, or the humans. The game has two different endings and one is awesome and one in my opinion sucks. It seems to me the one that sucks is merely there for an optional path for fun, and not for storyline. Other than that, you are pulled into a struggle for humanity and blablabla, you have to go save it, and someone else in the process. Simple, but sweet. Also, JackxRidley, if you didn't notice in your manual... I love it. 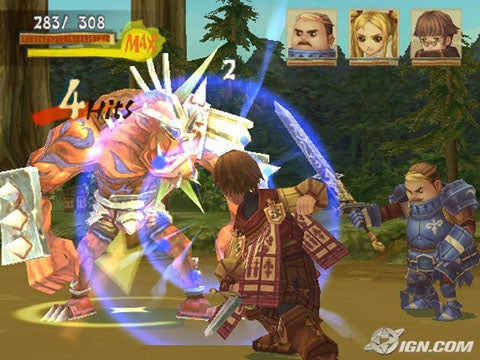 Controls - Simple, yet complex at the same time. Camera angle is adjustable, and it is very well placed even if you don't adjust it. Controls are simple, O attacks, Square does a special, X backsteps, Triangle is menu (as usual). L1 brings up your clock out of battle, in-battle it allows you to issue commands and use items. R1 locks on to the targeted enemy. X kicks objects and people. Simple and easy to get used to.

Music - Frankly said, the music in this game freakin' rocks. I have yet to find a piece I didn't like. The bigger boss battles and some of the optional ones are the best ones I've heard. The ingame music is very good too. Generally happy music that will keep you in good spirits, except when you enter more dangerous places such as castles and sewers. Everything sounds like it was produced by an orchestra, which is always a plus.

Characters - One of my favorite parts of this game. There are 177 characters available for recruiting, and the difficulty of getting them varies from super easy (Talking to them) or extremely hard (Getting to a certain place at a certain time or you wait till the next day, some are missable, some you have to recruit all of the other members of the race/guild they are in). Getting them all nets you very little in the long run, all you get is a picture of the mains under a certain tree, but I enjoy it since I am a JackxRidley fan and am also a fan of Ganz. All the characters have personalities that are unique and fun. Some characters range in being completely useless (Clive) or one of the best in the game (Elwen, Valkyrie, Galvados, Gil). Amazing recruiting system, I hope they implement it in the next game (if there is one *crosses fingers*)

Gameplay - The best gameplay you can get in a hack-and-slash. Out of battle, you can interact with almost everything and everybody, whether it be by talking or by kicking. Kicking is my preferred choice. Kicking the typical person will piss them off and they will duel you. It's fun to beat up on the people that tick you off, like Ridley at the beginning (I love her though as a character, she and Jack are the best characters in this game). Talking with them usually gets you a more friendly response though. In battle, it is straightforward. As you use your weapon choice (can choose from 1h sword, 2h sword, axe, or spear) you learn new skills, and you can assign them into your combo depending on how many CP (Combo Points, I guess) the weapon has. Each new attack costs a certain amount of CP to use in the combo. After you have set up your desired combo, inbattle, tap O repeatedly and Jack will commence the combo. Square fires a special of sorts, called a Volty Blast. Everytime you or one of your teammates lands a hit on the enemy, you get 1 Volty Point. When you get 10, you can use a Volty Blast. Eventually, if you learn all the skills of the weapon choice, you get a Super Volty, resembling Overdrive or Limit Break from FFX and FF7. To do these attacks, press Square and X at the same time when you have 100 Volty Points (Max). Also, you can learn links, to change your formation and give your party certain benefits and abilities. If you link with people long enough, you learn their skill. Equipping this to you allows you to master it to make it occur more often/make it stronger, etc. Also, inbattle, X allows you to backstep and dodge enemy attacks. Eventually you will be given guild missions to build your money and EXP. Most of these are optional, but I would do them anyway for the EXP. This game excels in the gameplay department, even with an optional dungeon you have to go through to get all the characters. You will recognize some bosses there from tri-Ace's previous hits, Valkyrie Profile and SO3.

Fun Factor - You will enjoy this game so much you will probably end up playing it 4 times through, if not more with all the missable characters. Don't pass up the opportunity to play this excellent game from tri-Ace, you can't live without it.

Do not waste anymore of your life not playing this hit by tri-Ace. This game is filled with charm and comedy, i often found myself laughing out loud at some of the things that go on in this crazy game. So let us know what you think of the game and review and don't be a jimmy.

love street fighter? love to laugh? well take a look at these!!!!

Street fighter has been around for 20+ years and is considered as the greatest fighting game franchise ever. As we all know with fame comes parody today i bring to you some of the most HILARIOUS street fighter related parodies out there enjoy!

In this video we see what street fighter REALLY sounds like LMAO!

In this video ryu is bugging sagat while he is on a walk with his girl.

This one is short but it delivers a quick laugh blanka makes pound cake.

In this vid we see ryu then and now lol

In this vid we hear what appears to be hakan and juri having sex LMAO!!!!!

You will hate yourself for laughing at this one!

There are many many more funny street fighter related videos out there. I hope i have encouraged you to seek them out and i hope you got a nice laugh out of some of these. As long as street fighter is around so too will these videos let us know what you think and don't be a jimmy.