News: Kinect Star Wars gets a release date and a dance off mode

The Kinect Star Wars Bundle and Game will be released on April 3, 2012. Here are some details from the press release including a new dance off mode.

The oft-delayed game and fancy R2-D2 Xbox bundle finally get a release date. April 3, 2012. But that's not all

With five dynamic modes – Jedi Destiny: Dark Side Rising, Podracing, Rancor Rampage, Galactic Dance Off and Duels of Fate – “Kinect Star Wars” makes it possible for Star Wars fans of all ages to delve into immersive Star Wars experiences. In addition to the previously announced Jedi, Podracing and Rancor modes, Xbox 360 and LucasArts have today unveiled new additions to the game, including: ...

Yup, that's right... a dance off mode. Can't have a Kinect game without dancing I guess. Seriously though, Lucas is going to allow them to do this to Darth Vader's character? I guess Robot Chicken already did it.

What do you think, will the dance off make you more or less likely to buy this game? I'm not too excited for this game, but that R2-D2 Xbox is pretty sexy. 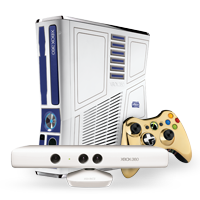