Grab a bunch of tales characters from different games and roll them all up in a ball and you got yourself a fun psp RPG.

Tales of the World: Radiant Mythology uses many characters from previous "Tales" games (including Tales of Legendia and Tales of the Abyss for the PS2, and Tales of Symphonia for the Gamecube and many more) and places them in an all-new story featuring a new hero, you! Does this all star cast of heroes make sense in this new world despite their different backgrounds, and can this game appeal to PSP users who have never played a Tales game before?

The game sports some of the best overall graphics that I have seen on the PSP. Granted, the cell-shaded and surprisingly non-blocky characters can't hold a candle to the model detail of games such as Metal Gear Solid: Portable Ops, but textures aren't everything as this game has proven to me. I have never come across any graphical glitches or collisions while playing, and the game constantly runs silkily smooth. Another little perk the game gives you is the ability to see your character's clothing change as he or she alters his/her armor (which can put you in a dilemma: Do you risk being as ugly as hell with the best defense, or lose a few points defensively to make your character look stylish?)

However the main thing that propels this game's graphical engine to being one of my favorites is the loading times for the graphics... or rather, the surprising lack of them. The maximum loading time I experienced was about ten to fifteen seconds, and that was only when loading a save after starting up the game. Everything else loads up amazingly fast even when your character alters his or her clothing and the skits pop up almost immediately. The only bad point is that the game uses the default PSP text format, but that's a very minuscule issue that I am pointing out for the review's sake.

The music and sound effects are decent and do their job, but aren't special by any means. When you get hit it gives you the same sound whether you were hit by a sword or bitten by an animal, and the attacking sound-effects for physical strikes have a similar lack of variation. There is a bit more variation in sounds for the magic though.

The music that plays in towns, guilds and battle are decent but most are so middle-tier that there's a good chance that you won't find yourself humming any of the songs anytime soon (except probably for the catchy song used for the animated opening). You also get to hear the battle songs for some of the characters from other "Tales" games during certain missions, but not only this a relatively infrequent occurrence but the quality of the battle songs were reduced as well. Still the battle themes you loved from previous tales games will still sound nice. 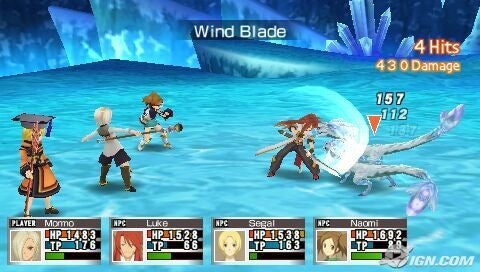 The story for this game is rather shallow. Your avatar is a person born from the mana tree (the source of all life on the planet) of ToW's world, Terresia, and with the help of a flying talking cat named Mormo have to find a way to stop the planet-eating being known as the devourer. Along the way you meet up with characters from previous tales games as well as a few new characters (including three characters not featured in any "Tales" game released in the US), but for the most part the quality of the story itself is mediocre and somewhat predictable at times.

However, this shallow story is offset by the interactions between the different characters you meet. Depending on the circumstances, you will often come across some of the characters talking to each other about a variety of subjects, and through them you'll find out about the backgrounds of the characters. People who have played previous "Tales" games will spot a lot of references to events that occurred in the earlier games, but the chats are designed in such a way that it does not make a player new to the franchise feel confused and unable to understand what the characters are talking about.

In terms of the action, this game focuses on dungeon crawling. You take quests from a certain guild you join early in the game both to continue the main story and to unlock extra features, characters and classes and then go to the designated place to fulfill the quest. These quests can range from killing a certain number of a particular enemy to saving someone lost in the dungeon to other similar things. While this system can get boring very quickly, there are two things that help keep the game refreshing.

The first is the battle engine that is used whenever you touch an enemy. The game uses an interesting meld of 2-D and 3-D plane fighting. You can use the analog stick to move around in a 3-D area and you can use the digital pad to control your character linearly and allow him/her to jump. The characters you use in the fight have their own batches of skills, but your own avatar - who you ALWAYS have to use (but not necessarily control) in battle - actually needs to master (which in this case means use fifty times each) his or her gained skills in order to unlock the more advanced and more damaging skills. Also, if used properly, your skills can be chained together to make long damaging combos and, if timed right, can link up with the attacks of other people to combo for even more hits and damage.

The second is the variety of classes and customization options that can help you improve your character and his/her items. By doing the massive number of sidequests, you will slowly unlock more and more extra options to use to help improve your character. Some of these unlockables are new classes that provide fresh, different ways to go into battle once you use them. Others are "recipes" that allow you to do a variety of things, from cooking items that heal your entire party to forging metals that can improve your armor statistics. To top it off, all these recipes need raw materials, so you'll find yourself spending a lot of time collecting the materials necessary to build them (and while doing so you'll inadvertently strengthen yourself in the process through fighting enemies). These options truly increase the replayability and length of the game by a good amount playing the story through without any of the quests can take as little as 20 hours, but can take up to 50 or 60 with the sidequests.

One other thing that is necessary to mention is the party recruitment system. This single area has some of the most interesting ideas but also some of the worst (but relatively minor) flaws in the game. On the good side, the recruitment system has a unique aspect there is no guarantee that people you want in your party will agree to come with you for the quest you need to complete. While this may prove to be at times, this adds a realistic aspect to the party system, it feels as if the characters now have their own lives to handle and can't just drop everything just on your whim. Not only that, but the game includes its own set of default custom characters that grow in level and keep up with you, as well as upgrade their own armor. These characters also come-and-go, but whoever is available in the recruitment menu will not refuse to come with you on a quest, allowing you to fill any necessary gaps should too many story characters refuse to join you.

As mentioned earlier though, this system is also home to some of the most annoying, if minor, flaws the game has. First, after every single quest (some take as little as three or four minutes to complete) your party disbands, forcing you to re-recruit people when you start a new quest, it would have at least been nice if they gave you the option of NOT disbanding your group when a quest is over, and only forcing people out if they can not participate in a certain quest for whatever reason. Second, each of the three towns has different story characters to recruit, but you can not recruit characters from earlier towns in the new one. Story-wise, this makes sense. However, this is a hassle gameplay-wise since you essentially go into one town, go into its bar, recruit one or two people, leave the town, go to the next town and recruit the other people you want from there. Considering that the story mentions that there is contact between the different towns, it wouldn't have been unrealistic if the player could "summon" the characters all from the place that the player is at now. Also, unlike the custom characters, the story characters do not level with you. In some cases (like when you reset your class to a new one) this can be a good thing since you have a high level teammate to use since all the custom mercenaries level down to your level as well. However, due to the number of quests and the fact that the story characters can and will refuse to do certain quests with you, there will be times where you will be forced to sit and watch as several characters you want to use are slowly left in the dust level-wise because they don't want to work with you.

Tales of the World: Radiant Mythology is a fun dungeon crawler whose short loading times and fluid gameplay make it a great portable game to have with you. Furthermore, despite the shallow story the character interactions make the game fun outside of battle for both "Tales" veterans and new players alike. I highly suggest it for anyone looking for a fresh psp rpg and for tales veterans; Ironically, despite most of the playable characters being people from older "Tales" games, this is one of the best games to immerse new people in as they essentially get a taste of multiple Tales games at once.

Any tales fans out there? RPG fans? PSP owners? Let us know what you think and don't be a jimmy.

How to play Tactics Ogre on a Modded PSP with FnJimmy

I got a modded and hacked PSP that plays 100's of 1k's games. I can play whatever I want. Just not actual PSP games.

This is a video of me demonstrating how to play game on my modded PSP. goukijones wanted to play Tactics Ogre, but doesn't have a PSP so he asked to borrow mine. Sure, no problem. I have a normal PSP, well it's hacked ...

How to play Tactics Ogre on a Modded PSP with FnJimmy