The Devs did a good job hyping people up before the games release, check these boss-ass videos.

At Killzone.com they have released some truly awesome videos for Killzone3 before release. Game is being released Tuesday and I'm not sure if they are uploading more.  http://www.youtube.com/user/HelghastCinema and http://www.youtube.com/user/TheShadowkilla01#p/u have been nice enough to upload them to youtube. These videos show off some of the new levels, re-done old levels,trailers,behind the scenes and classes. Enjoy the HD rape-fest and leave a comment on what you think ; don't be a Jimmy.

Marksman class fucking shit up in a storm

Dev Diary- Controls are Everything (go to 1:45 for pure epic)

Behind the scenes with old dudes yelling

How to play The Engineer

So who's getting K3 Tuesday? :D 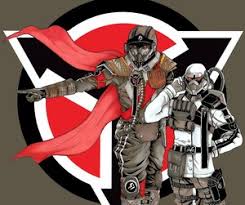