When people ask me what is my favorite Final Fantasy, I tell them it’s Final Fantasy XII. And most people look at me like I’m crazy. When I ask if they’ve even played the game, and they say no. So… I’m telling you guys, you have to give it a shot.

This IS my favorite Final Fantasy.  The world is huge and connected all throughout, you can walk from one end to the to other.  Fully animated cut scenes and great voice acting bring the characters to life.  I love them all.  The story includes Final Fantasy Judges, Viera, magic, mystery, two brothers in conflict, betrayal, a lost boy, a thief and his co-pilot, a dead husband and powerful enemy.  I love this story. (Yes, I have actually watched the story cut scenes in this game.)  Most conclusively, the main reason I love FF12 is the combat has been my favorite design in any Final Fantasy.  The gambit system and programming your team to react in battle is a blast.  It’s the main element why I’ve played through it 3 times.  *3 times is a lot for me in my world of gaming. 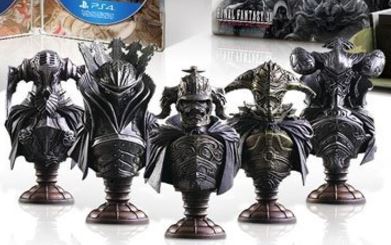 My personal favorite Final Fantasy of ALL TIME!!! My HYPE is real!

Releasing July 11, 2017, you bet your behind there will be a live stream on Gouki.TV.  I can't wait to play this game again.  I kept a PS3 with backward compatibility in my collection for the longest time, JUST to play the Final Fantasy XII.  Best combat system ever.  Great characters.  And an amazing soundtrack, have a listen below.