Two of the best PS2 games get an HD makeover.

So I just picked up the God of War collection for the PS3, and let me tell you, it looks great. I'd swear it was a current gen game if I didn't know any better.

If you don't know, the God of War series were two of the best games released in the last generation. Now, they look even better. The controls and story are the same, but the framerate has been improved to a nice constant 60 frames per second and the resolution has been upped to 1080p while some nice anti-aliasing has been turned on.

If you missed one (or both) of these games on the PS2, now is the time to pick this up. Not only do you get two great games to play on your PS3, but you get them for less than $40. Well worth it.

If you played through both on your PS2, or you have a backwards compatable version of the PS3, you might not get much out of this unless you're a huge God of War fan who really wants to see it in HD. 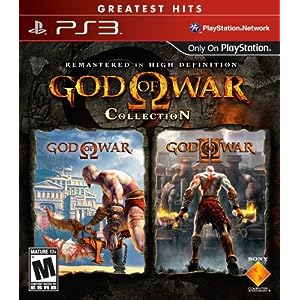