Originally released back in 1998 in the Arcades, JoJo’s Bizarre Adventure is a hardcore fighting game based on the original manga Stardust Crusaders. It’s finally being re-released for everyone’s enjoyment on the PS3 and Xbox 360. Is it worth your money? 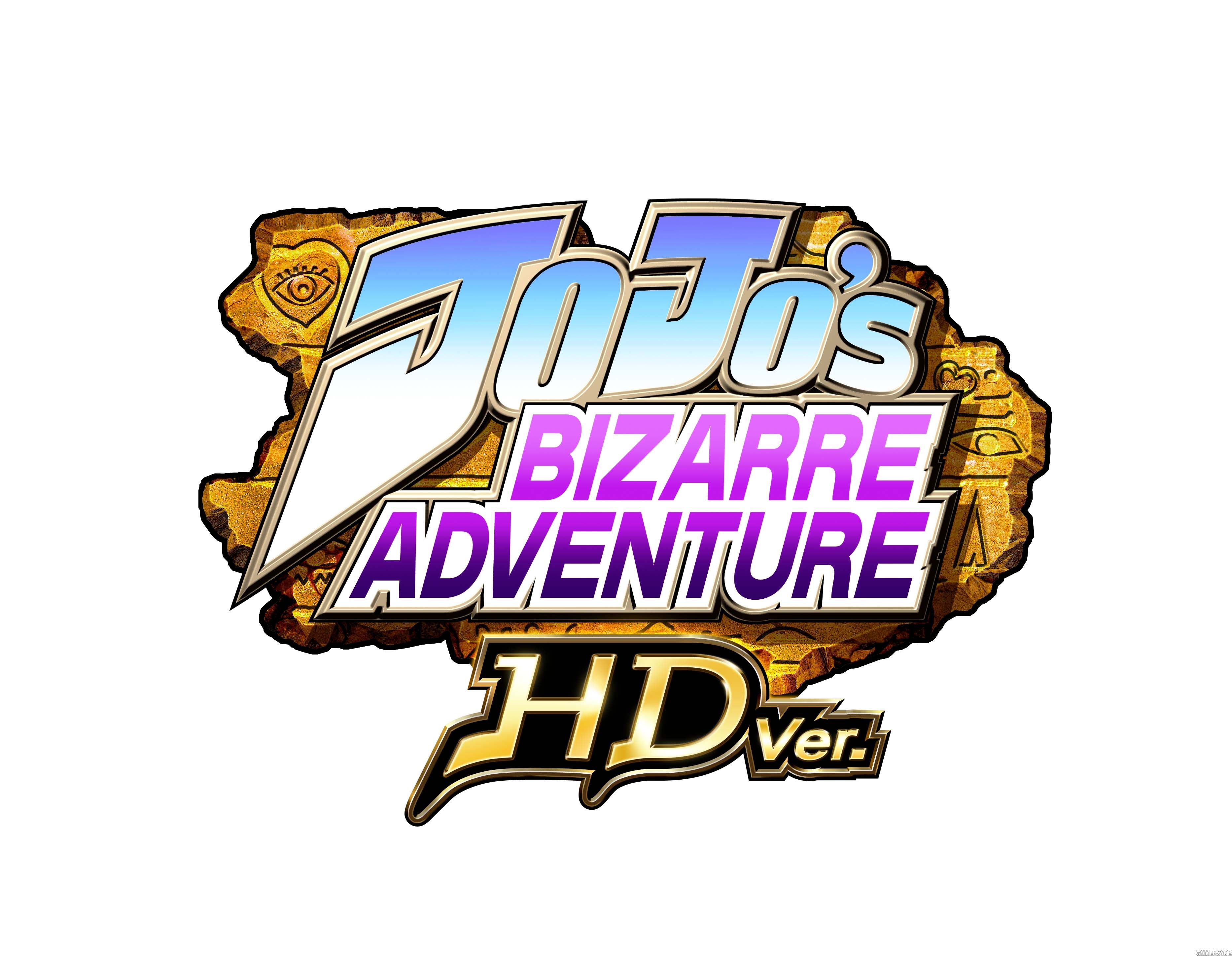 If you were a fighting game fan back in the late 90’s going to the Arcades you may have heard of and played JoJo’s Venture or the later renamed JoJo’s Bizarre Adventure. Although if you were like me then you never got a chance to play it because either your arcade didn’t have it or you were hooked on Street Fighter III and Marvel vs Capcom games. Unfortunately the latter was the case for many of us and we missed out on JoJo’s Bizarre Adventure. Even after the game was ported to the PS1 and Dreamcast many gamers had no clue this game existed. Capcom has given us the opportunity to play this golden gem from the CPS-3 era on the PS3 and Xbox 360 with JoJo’s Bizarre Adventure HD.

The story of JoJo’s Bizarre Adventure HD (JoJo HD) is based on the 3rd story arc of the original Manga commonly known as Stardust Crusaders. Following a teenager named Jotaro Kujo who develops “Bizarre” supernatural powers known as the “Stand”. Jotaro learns from his grandfather Joseph Joestar of the relation of the “Stand” with their bloodline and of the ancestral enemy of his family, a vampire by the name Dio Brando. Jotaro then embarks on a quest to save his mother and to defeat the evil Dio. JoJo’s HD explains the story of all 22 characters through the games story mode (Arcade). 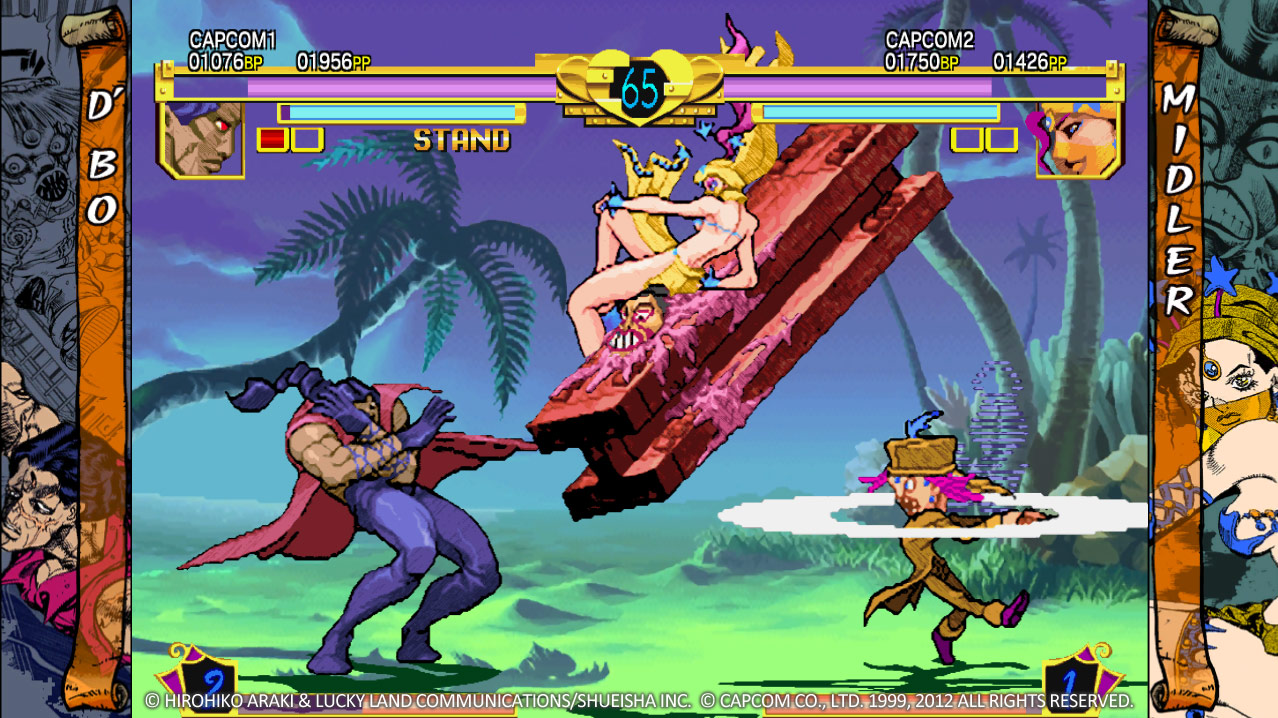 JoJo’s HD uses a 4 button control scheme similar to the recent Marvel vs Capcom 3 game with 3 attack buttons light, medium, heavy and a stand button. The stand button turns your stand on or off and is used to enhance your characters attacks and defensive abilities.  The game has your typical health bar in that when its’ depleted you lose the round, but also has a stand meter which determines whether you have access to your stand. You have basic attacks and special moves as well as super moves that use super meter that builds throughout the match. The game features 22 characters each with their own special attacks and super moves. The stand creates an interesting and strategic form of gameplay, because you have to protect your stand meter while also trying to defeat your opponent. Some attacks don’t take chip damage if the stand is out because it drains the stand meter instead. Some characters also have the ability to attack and move while their stand is attacking as well, which creates sort of a 2 attack mix up situation. It’s a very interesting style and other games have recently been released that come from JoJo’s stand mechanic. There is also a clash system as well as the blazing fist match system. A clash happens when both players attack at the same time with an attack of the same strength while both characters have their stands active. The clash system can often lead into the blazing fist match which creates a button mashing type of mini game where the loser takes a lot of damage. Although JoJo’s HD looks simple to play it is has a very deep gameplay style and isn’t typically for the casual crowd. Making JoJo’s Bizarre Adventure HD a difficult game to master, but a fun and rewarding fighting game. 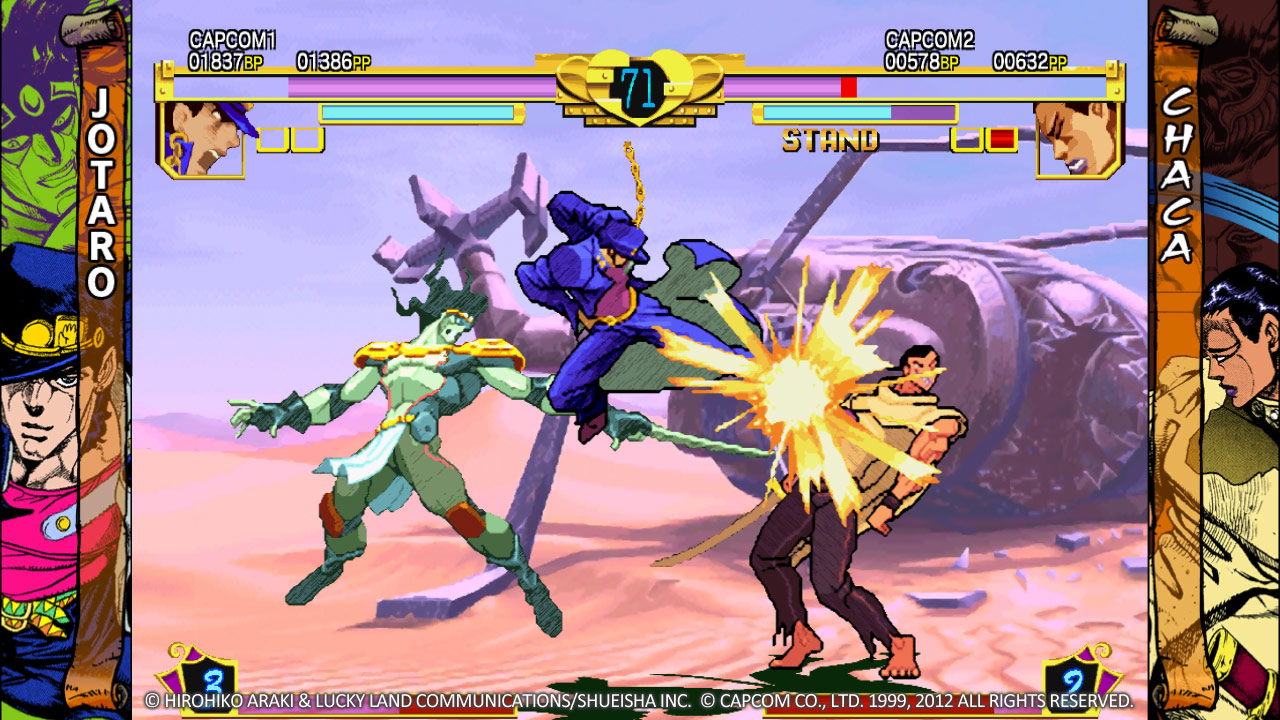 Back in 1998 when JoJo’s was originally released it was a beautiful and colorful game with an anime art style. Capcom has stayed faithful to the look of the game while upgrading the art to HD. Cleaning up the games visuals, while also leaving the original blood and effects intact. Each character has its own artistic style and visually impressive. Sometimes it’s easy to miss old school 2D sprites like those of in JoJo’s HD. It’s completely faithful to the original Manga artist and author Hirohiki Araki. 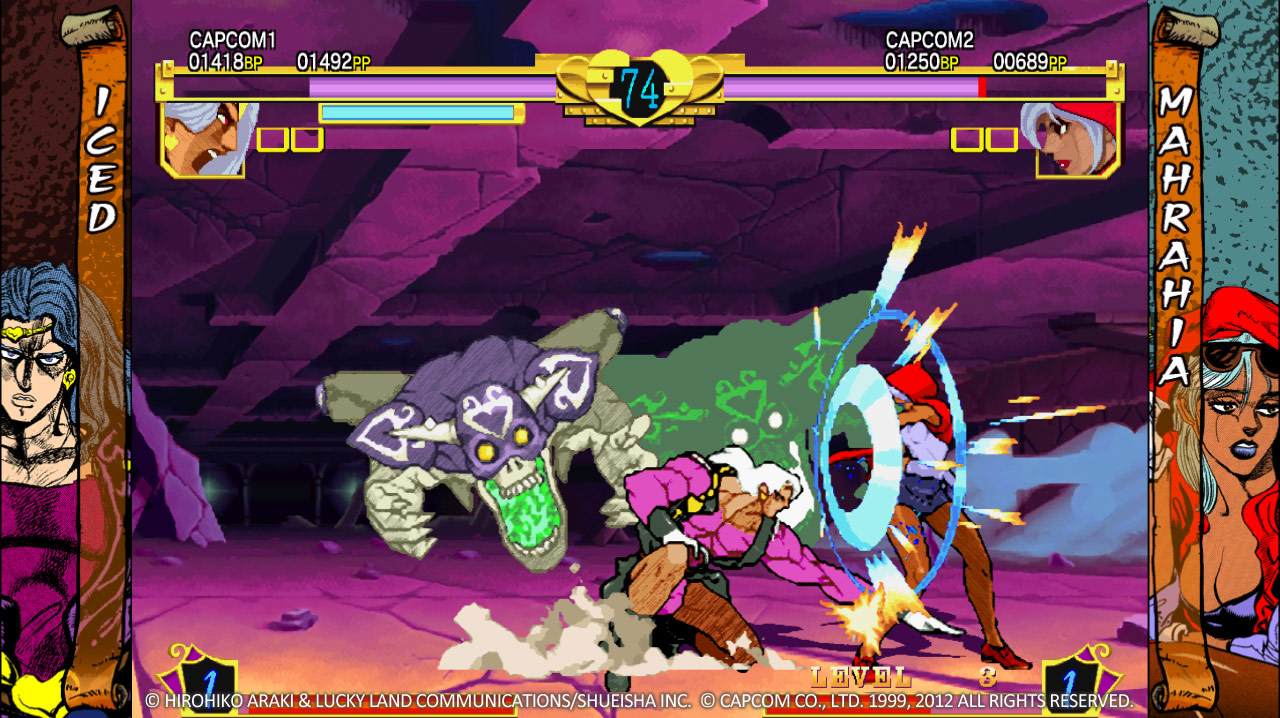 The overall audio experience of JoJo’s HD is fantastic. The classic tunes of the 90’s are well represented here and it brings back some fond memories of the arcade scene. All characters speak in Japanese as this is a direct port of the original game. It’s a beautifully sounding game and really adds to the overall experience of the game. 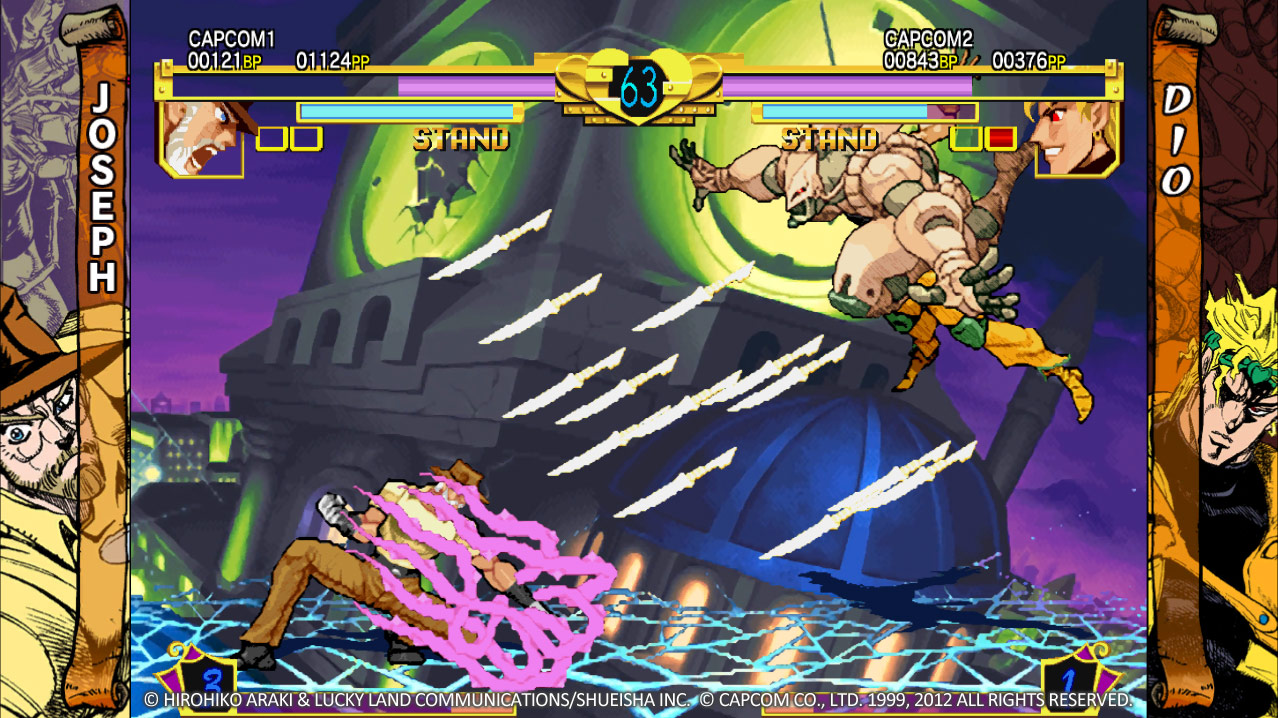 New to the game is the inclusion of online play, which is typical in fighters of today, but a first in the JoJo’s Bizarre Adventure series. Modes include Ranked, Player, and Lobby matches of up to 8 players. You even have the option of a fight request system while playing all game modes including training mode, so the action never stops. There is also the ability to save and upload replays and unlike most fighting games JoJo’s HD allows for the use of hitbox information while viewing replays. This feature offers the hardcore crowd the ability to break down the game on a much higher level. The netcode for JoJo’s HD is far superior to 3rd Strike Online and in the online matches I had there was absolutely no lag what so ever. Unfortunately at the time of this review there was no online community on PS3 and it was almost impossible to find matches to play. When it comes to online play JoJo’s HD is one of the best available to date. 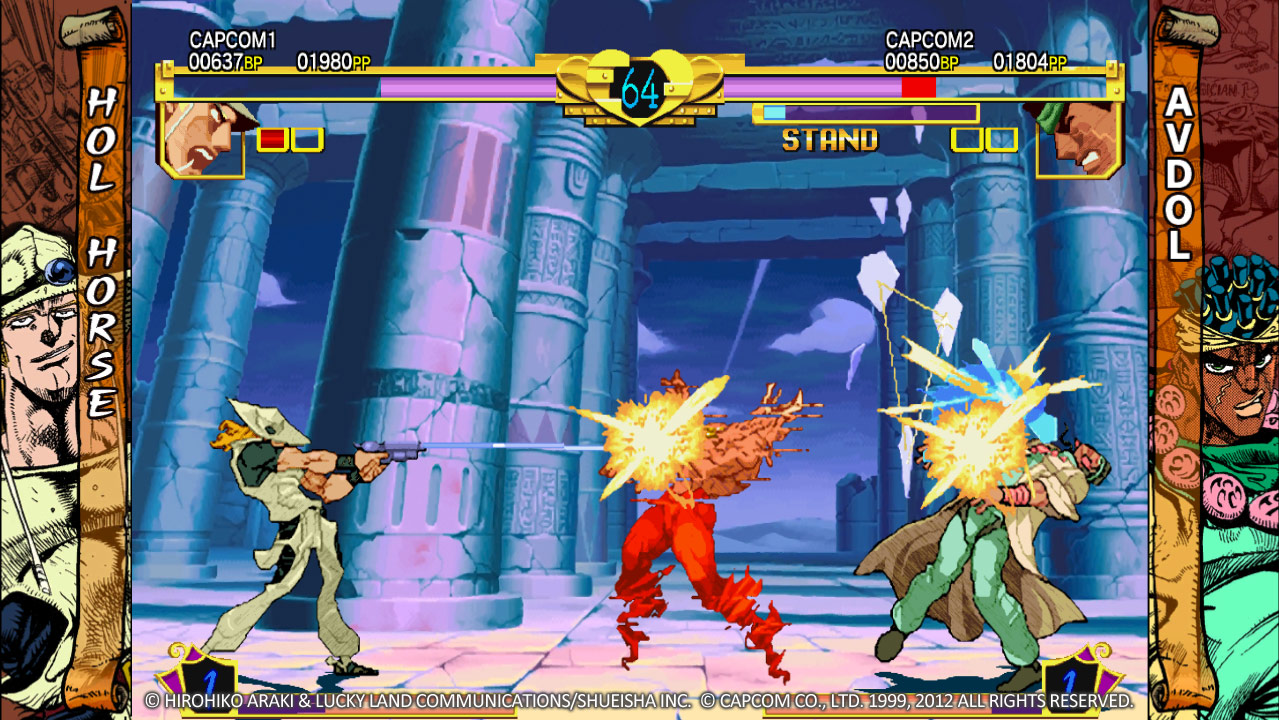 Although the price tag for this game is $20 and it is a 14 year old game, JoJo’s Bizarre Adventure HD is a must have to fans of the series and even to those who have never experienced this game should give it a try. There is a lot of fun to be had here, and if the online community picks up then you can easily have hours of entertainment on your home consoles. I was a firm believer in that $20 was too expensive, but after playing this game and having a blast I honestly wish Capcom would release a full blown new fighting game using the latest Marvel vs Capcom 3 engine. Hopefully one day we will see a new JoJo’s fighting game.