This is a story of a franchise that has grown with me overtime.

Video games can invoke all different types of emotions from joy to anger to sorrow. I want to talk about my favorite rpg series.........Tales of (insert crazy name here). Yeah i know FF is the most beloved rpg franchise of all time but that's not true for me. Every game i have played in this series is like a bookmark on the chapters of my life. So let me take you on a trip down memory lane. 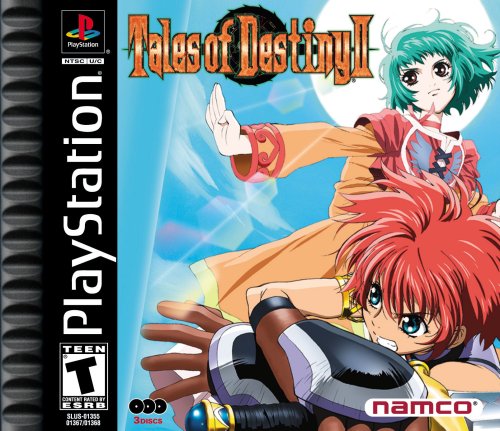 We start off with my very first tales game tales of destiny 2. 2001 i was only a 12 year old kid but even then i was knee deep into rpg's. Christmas was coming up and i didn't know what to get and then my cousin tells me to get this game called tales of destiny 2. I had never heard of it but my cousin was a true gamer so i trusted him and asked my mom for it. So i got my wish and on Christmas day i popped it in and i was hooked from the very start. I loved the 2D sprites because it was so clean and crisp but what really grabbed me by the throat was the battle system. It was AMAZINGLY fun teaming with my party of 4 doing epic combos and flashy magic spells in real time. This was the first step in what was to become a long line of greatness.

On to my second tales game Tales of Symphonia this one was a doosey. Now 2004 i am a 15 year old young man and once again its Christmas. It was my first Christmas back in Chicago after moving to Minnesota the year before and my whole family was there. All my aunts and uncles were giving me money and then at one point i had enough money to get pretty much whatever i wanted. So i walked up to my local GameCrazy which was open on Christmas which is pretty awesome and i scooped up my second tales game. I was thinking about waiting till i got back home to Minnesota to play it but i COULD NOT wait so popped it in my aunts Gamecube and once again i was hooked from the start. At that time it was probably the best looking game i had ever seen it had a beautiful cell shaded look and a soundtrack to DIE for. This was the first rpg game to make me feel real emotion by what was happening i wont go into any details because i don't want to giveaway the story. Once again the battle system was deep and AMAZINGLY fun and for many years this was my #1.

On to my third tales game Tales of Legendia this one was a little odd but awesome none the less. Now 2006 and I'm on the fast track to 17 years old and i just got a little side job at my local mom and pop game store. I was really waiting for this game to come out and my boss knew it too and he gave me a Tales of Legendia necklace featuring the main character and one of the main villains of the game and needles to say i was elated. The game came out in February and on release day it was a blizzard outside but i wouldn't let that stop me. I went up to my job / local game store and the game was already on the counter waiting for me because my boss knew that a blizzard wouldn't keep me away. I took it home and once again i was into it from the very beginning i was a little thrown off by the blocky graphics but it didn't bother me. The battle system was not on par with the previous games but it was still very fun and a unique story that has many twist and turns to keep you guessing it was not as good as the rest but a solid tales game.

Tales of the Abyss

On to my fourth tales game tales of the abyss such a great game. Still 2006 but at the end of the year i had just moved into a new apartment and didn't have a whole lot but i was looking forward to one thing a brand new tales game. The box art alone had be thinking greatest game ever and boy was it close. The visuals was beautiful and the environments were really refreshing but the battle system was AMAZING. AT this point this battle system was by far the best i had experienced so deep and elements would change your special moves completely and just gave you that much more to work with. For me the story was incredible you start in one place and you end up somewhere you would never expect it was my favorite tales story at the time. It also featured my favorite mage in ANY game to date Jade Curtis (the guy in the blue) play the game and you will understand how godly he really is.

On to my fifth tales game tales of Vesperia.......PERFECT. In 2008 i got this game and i didn't even have a 360 that's how bad i wanted this game. I got a 360 for Christmas that year and it was time to experience to perfection that is Vesperia. The problem at that time is that i had a small SD TV which made the game look weird and the text was almost unreadable. SO about a week later i was able to get my first HD TV and being the first game i will play in HD i didn't know what to expect. Once the intro started to roll i just stood there eyes wide open and mouth gaping i was literally blown away it was the most beautiful game i had EVER seen it was like a living anime. The battle system was taken up a few notches and added air combat and massive enemies to set the stage for epic battles. The story was kind of iffy but the pure charm and beauty of this game heavily out shines that and to this day it remains my all time favorite rpg game.

Video games are a form of entertainment for people and nothing else but for me they are so much more i look at my game collection and see a story of my life. From a small kid with a Playstation to a grown man living in the HD era i have grown and this franchise has grown with me. I hope i have inspired you get into this franchise or to share your life stories as a gamer. Do any games go side by side with events in your life any games hold a special place in your heart let us know.