One of those rare games that you always wanted to play but never knew existed.

Back when this game was on the brink of release i happen to come across it via internet ad it looked awesome so i looked it up. I saw the trailer and thought to myself " I must own this" the gameplay looked awesome and an all girl cast was a interesting change from the norm. Simply put it was money well spent and im here to tell you why.......read on.

The gameplay is great. At first, you may think that the game plays slowly, due to the fact that no one in this game moves at a very fast speed while walking. However, once you learn of a beautiful little move called the homing dash, things will really start to speed up. In fact, once you and your opponent start using the homing dash, the speed of the game may hit you hard in the face. Furthermore, this game has some of the largest fighting arenas I have seen. They are large enough spanning across, but just wait until you see how high they can get. In fact, if you launch your opponent in the air, rise up to meet them, and launch them again, it seems like you are going up the length of three screens! Let me say that again for emphasis...THREE SCREENS! These large fighting arenas can really make things more interesting, and it doesn't hinder you when it comes to pulling off awesome combos. There is also this thing in the game called the arcana system. With it, you not only choose a character to use, but also the arcana that your fighter will use in battle. This will give them a different set of arcana powers and abilities during fights. With the powers of the arcana, you can perform a wide variety of attacks, that include, but are not limited to, causing lightning storms, leeching your opponent's life, and even seeing them executed! However, you also gain some nifty abilities, like creating dopplegangers, being able to triple jump instead of just double jump, and even raising your defense. Also, there are four modes of play: story, arcade, versus, and practice. Another thing is that there are two actual playing styles. There is the normal Arcana Heart, and then there is Arcana Heart Full.

This is something I feel a strong urge to include, and for my own reasons. First off, let me say that there are those people that feel that the larger the roster, the better the game will be. But check this out...this game fits right up there, if not surpasses, some or most of those games with larger fighting rosters. This game has a total of 11 maidens to choose from. However, with the arcana system, and there being 11 different arcana to choose from, this brings you up to 11 characters with 121 combinations you can make! Not to mention that each characters has eight different colored outfits, so that adds a little more variety to it, as well. 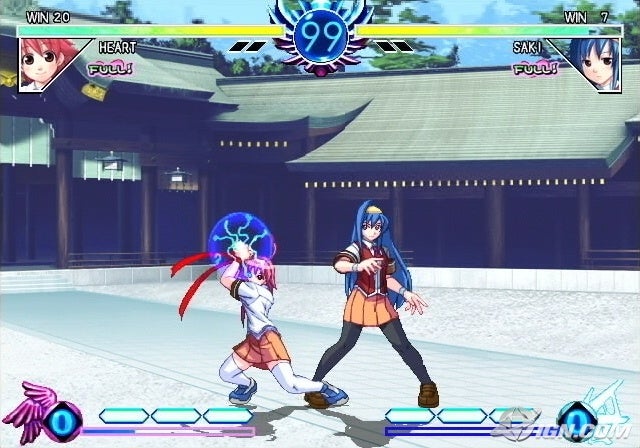 Some fighting games don't really have a central story. You just go around to different arenas and beat the daylights out of people. However, a strong central story was not overlooked when it came to the making of this game. There is a great atrocity that is going to occur in Tokyo, and each maiden, a young girl who has the power to communicate with the arcana, tries to stop this from happening. Of course, each character has their own personality, so they are all in this for different reasons. For example, one fighter may want to stop these events from occurring because she does not want to lose any of her friends ever again. Another might be in it because she has nothing better to do. Yet another may throw herself into the battle because a large organization asked for her help. However, along the way, you will have to do battle with the other maidens, to ensure that you be the one to bring an end to this series of events.

The sound for this game is great. When you hit someone with a light attack, it will sound like you just slapped them hard across the face. Hit them with a power attack, however, and you can hear the difference...the force and sound of the hit literally echo very loudly across the arena. Lightning crashes from the skies above. Rocks crumble as they hit your opponent over the head. Strong winds gust violently across the arena. All of this adds more realism than one would expect from a 2D fighter. A few people say that the music is not that great. However, it's something I don't really mind. True, some of the songs could have been better, but for the most part, it's alright. However, you will hear songs that include a softer song in a garden, an upbeat, nightlife tune for a market, and even a jazzy kind of dance tune. A few of these tunes really add to the atmosphere of the setting, but not quite all of them do. So, yes, I will admit that some of the songs could have used some work, but it's nothing really to complain about, and it doesn't really impact the score.

If you are one of those people that loves anime, then you should definitely look into this game. The characters are drawn in a very anime-like way. That is, until you get to the fights, in which case they lose some of that anime look, but not so much. The backgrounds are very colorful, and when you activate your arcana, they change entirely, giving you a whole new environment to fight in for a short time. Some of the arenas are just a bit plain, but, again, not all of them are, so that's a good thing to know. Arcanas, too, look very cool, and some of them even look a little intimidating. One thing I really want to comment on is the shadows. For many 2D fighters, a circle is just drawn beneath the characters, and you are led to believe those are shadows. However, the designer for this game obviously had a good idea of what a 2D fighter game's shadows should look like. They actually resemble the characters, and they move in the way that the characters do. For example, if a fighter sways back and forth, so will the shadow. If a character is walking, then the shadow will walk right along with them. These effects make the shadows some of the most realistic I have seen in a 2D fighter. When you throw all of this together, the graphics of this game come out to be something that is just pure eye candy.