When I first heard word that Megaman X: Command Mission was going to come out, I instantly got very excited. The first true RPG ever to grace the Megaman legacy? Would this RPG turn out to be a great addition to the series, or would it be another one of those many failed attempts at broadening Megaman's horizons?

Story:
Well, stories were never the Mega Man series' strong point, but they at least put out a decent one. Veteran Maverick Hunters, X and Zero, as well as their new partner, Shadow, hear of Epsilon, the leader of the Rebellion, leading a Maverick uprising. So, with the assistance of Colonel Redips back at the base, they head over there to find out what is going on, and what the substance "Force Metal" has anything to do with it. Through a twist of fate, X finds himself alone and ends up in the base of the Resistance, a Giga City force fighting the Rebellion. Can X and his friends, quell the uprising and make Giga City safe for the Reploids again? Trust me -- while the story sounds simple, I guarantee that you will be surprised. Oddly enough, X changed from pacifist to a guy that'll point his gun at anyone that even remotely might pose a threat. Guess our Blue Bomber finally grew up, huh?

Graphics:
Decent, but could be better. They used cell-shading for the character models in the game itself, but I wish they had done more motion to the cinema sequences. One character's mouth didn't even move while he spoke . It was odd watching them have a neutral expression while they shouted death threats at the enemy.

Gameplay:
Fluid. It has your typical RPG elements - EXP points, money (Zenny), Life, etc. Instead of armor, you equip "Force Metal". The catch is, if the amount of Force Metal is above the resistance level of the character, they will suffer in the form of LE loss, WE loss, etc. For the most part, it is a RPG and Mega Man X fused into one: each "Chapter", you go around defeating the bosses, picking up rare and not-so-rare items, and recruiting characters to join your cause. There are a total of seven playable characters, each with their own unique weapons and abilities, and each time you level up, all seven get the EXP points (unless they are dead, of course). You have your typical RPG ailments, which were changed into mechanical terms (such as 'Poison' was changed into 'Virus') and your elemental weaknesses (then again, Mega Man games have always had this factor...). And, believe it or not, brute force is NOT always the way to go in this game! Strategy is key into winning, as it will help you tremendously. Of course, if you feel brute force will work, go for it. =) And of course, Final Strike. Once you have three people in your party, depleting an enemy's life to 25% will allow you to activate Final Strike. This is basically a flashy way to finish an enemy off, but it can give you the extra nudge you need to, and dramatically boosts the amount of stuff you retrieve from battle.

Music:
I loved the soundtrack, even if others didn't. I find myself humming the tunes along, and I'm glad that they allowed you to listen to the game's soundtrack in the Sky Room. I even went out and searched for the music online just so I could listen to it whenever I wanted to. The only problem I had was with the voices. While I enjoyed some characters voices (Marino's, Ferham's, and Mach Jentra's were well done), others made me want to gag (such as Cinnamon's). 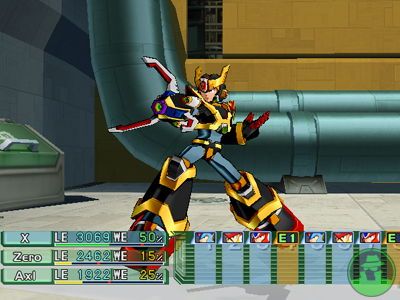 Difficulty:
The game was not extremely difficult, but I did see the game over screen a few times. The bosses themselves can be a tad difficult at times, but with a correct strategy you can basically beat any boss without much effort. I ran away from barely any battles in the entire game and I had some slight difficulty with the last boss, that was about it. When all of the characters in your party die, you are given the option by the game to A. Restart the Battle, B. Load from the memory card, or C. Accept defeat and go to the title screen. For the most part, you'll be picking A so that you wont have to go back to the last save point (Which is quite nice).

Extras:
I think the extras themselves take up 90% of the game. At a certain point, you can deploy recruited mechaniloids to the stages to gather up goodies, ranging from more money to extra weapons to stuff for the Sky Room. Oh yes, the Sky Room. A great place to hang out. Figure sets found and bought from the vending machines can be viewed here, as well as sketches drawn by Capcom artists themselves (once they are gotten, of course). You can customize the room by placing different posters, and listen to music and watch cinema sequences from the game. You can even customize X himself by changing the color of his scarf! There are secret bosses which will give you fabulous, extremely rare prizes if you beat them, secret shops with rare items, and the Challenges. Fulfilling Challenges will unlock more items for you. So, how do you know whether you fulfilled a challenge? Check the computer terminal in the Sky Room. It gives you very useful data on the challenges you have fulfilled as well as the amount of items found in each stage, the maximum attack strength you've done, etc. It will become your best friend in the game.

To Mega Man fans and new RPG players, this is a welcome game. It's a little simple, so RPG players that prefer hard, complex, extremely irritating-style games will be a bit turned off. However, there are truly no bad points to this i enjoyed this game, and would recommend purchasing it if you are able to find it.

So does this game seems as though it's worth looking into? Let us know what you think and don't be a jimmy.