Come to me dark warriors battle awaits us!

PSP owners, RPG fans, and all of those in-between who missed out on the first release of Valkyrie Profile and wanted to try it can finally celebrate. Thanks to some of the wiser people at Tri-Ace and Square, gamers can play this game once again and NOT have to worry about paying out of the you-know-what for a new copy. Valkyrie Profile: Lenneth is a fun game and although hurt by a few flaws, it stands as one of the best PSP games.

This story is largely based upon Norse mythology (although it doesn't strictly adhere to it), and deals with the end of the world, and the battle between the gods. Odin, the leader of the gods, has sent out his valkyrie (you) to go and find him brave souls who are nearing their last moments in life (your party members) to send to Valhalla, where they can fight for him. This is your mission. Now, each warrior you seek out has their own individual story, detailing their last moments in life, their meeting with the valkyrie lenneth, and their decision to fight for the gods.

That's the short version of this story, since I don't want to ruin it for you. Since there are many characters for you to recruit, there is a lot of side stories, many which are tragic, some might even get you choked up. That's not even considering the main character trying to realise her purpose in life, and who she truly is, and the genius wizard who is obsessed with her. A truly fantastic story! 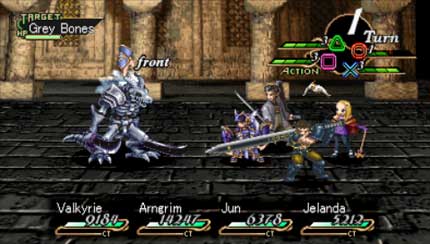 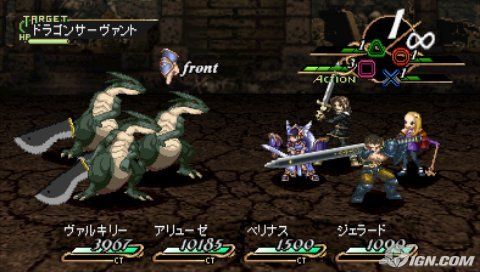 The graphics are well done, it's like having a playstation in your hands. There is hardly any noticeable slowdown in the gameplay, unlike some other PSP games I've played. All the towns have their distinctive style, and all of the dungeons look good, with a fair amount of detail added in the background. All of the characters are very well designed, which is amazing considering each of them has their own 3 hit combo and special attack (the animations for these are amazing, by the way). The best part in this category is the full motion videos. Very well done! There is even an option to watch all the FMV's you've seen before.

There's a lot of upbeat tracks in the game, which help when you have to go explore some vast dungeons. There's a couple tunes I won't forget, in particular the ones they play when your meeting a hero who is about to join you. Also, the voice acting in this game is very well done. Each character has a variety of quotes they'll use before, after, and during a battle. As you progress throughout the game, you will also be able to hear all of the separate characters quotes in an extra sound option.

The gameplay is really well done. There are, essentially, 3 different areas you visit: towns (used mainly early in the story, and to recruit different characters), the sky (we'll cover that in a bit), and your "dungeons". You start out, after the intro tutorial, in the sky, where you can fly around the world, to seek out those souls who are worthy. By pressing "select" in the skies, you can hear the distress calls of mortals (begin a recruitment story), or sense "great evil" in a particular area (discover another dungeon). You can also save your game and change party members in the skies. Most of the game, however, will be spent in the various "dungeons" around the world. I put dungeons in quotes because most of the dungeons are in various locales, such as woods, castles, or underground.

Once your in a dungeon, the screen turns to a castlevania style game. You walk around like this, able to jump, duck, swing your sword, and shoot out crystal shards. These crystals are used to freeze enemies and make stepping stones to access higher areas. There are a couple of ways to get into a fight in these dungeons, you can either walk into an enemy or hit them with your sword. Yea... I recommend hitting them. This lets you attack first, as opposed to possibly getting attacked. Each one of your party members is assigned to a specific button in battle ( either square, triangle, circle, or X). Their order of attack depends on what combinations you hit those buttons. They can also attack up to three times with different types of attack, depending on what weapon you are using. So, you can see there is a lot of variety in the attacks, especially since some attacks will knock your enemy up into the air, making timing your attacks a factor. Each attack adds a percentage to an overdrive gauge, and once you get to 100% you can select a character to do their special overdrive attack on the enemy. This is always a good thing!

One more thing to cover about gameplay is character development. One thing you might be asking is "If your sent to find souls to fight for the gods, why are those people fighting with you?". Good question. The game has a set time before the final battle at the end of the world (Ragnarok), and that time left is divided into 8 different chapters for you to play through. On each chapter, you are asked for an warrior with certain qualities. Now as your characters level up, they are given points to put into either obtaining skills or morals. Yes, you can make your character braver by putting points into it. By doing this, you can give Odin an ideal warrior. This part was hard for me. For one, your training and fighting with these characters, making them stronger and getting accustomed to them. Now you have to choose one to send away, never being able to use them again. So you have to be careful who you send, because you still need to be able to fight on.

Oh, I almost forgot, after the end of each chapter you go back to Valhalla and you are rated on how well you are doing, and given gifts accordingly. You can also see how the war is going on in Valhalla and check on the status of all the warriors you have sent to Odin. They even have a list of all of their significant accomplishments while they have been there, including what rank they have achieved.

There are 3 different endings to Valkyrie Profile: Lenneth, as well as 3 different difficulty settings. There are some very specific requirements to get the better ending, though, so a guide may be necessary. Also, you can access a separate bonus area by playing through in hard mode and collecting specific items.

This version is definitely the one to get for any psp owner, as the playstation version can cost well over $100 for a good copy .

So will you join Odin's army of warriors in Valhalla? Let us know and don't be a jimmy.