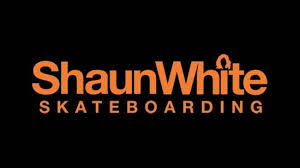 Shaun White, he snowboards and skateboards. He’s a pro in both and very fun to watch. How about his games? Well they both SUCK!

The story of Shaun White Skateboarding has an interesting premise. The city has been taken over by the Ministry, an organization that controls the city and the people living there. The entire city is the color gray, which is the Ministry’s favorite color. All of the citizens are like mindless zombies all dressed the same, walk the same, and live life the same. Shaun White however is the Ministry’s top priority as he’s been transforming the city back to the way it was. By bringing color back to the city and freeing citizens from the Ministry. As the game starts Shaun White is captured by the ministry and it’s up to you to take over and free the city with White’s magical skateboard (I’m serious, that is what happens). You then get to create your skater, choosing gender, skin tones, hair, and clothes. The character creation is very simple and doesn’t have a lot of depth to it, which you may have grown accustom to over the years. Once you’ve created a character you are greeted by a man name Jonas or Jon or Jake or something with a J (He’s so annoying that I tend to tune him out), who teaches you how to play the game. Eventually you start changing the city, by bringing color to it and saving the citizens. How you do this is by building up you Flow Meter. To fill up your meter, you’re required to perform flip tricks, grabs, and grinds. The higher you meter the more things you can change, and the more citizens you can save.

The problem with this is that you’re constantly doing tricks. You spend less time looking for interesting line, and more time trying to bring color to the city. The shaping mechanic is pretty interesting, but most times it just takes you out of the game. It’s so unrealistic that it just comes off as silly, instead of fun. I spent about 5 hours playing through the story, meeting new characters that help you along the way, meeting Shaun White and skating with him, and building up my flow and earning experience to unlock more tricks.  After all of that I found myself hating the game more and more.

This is where Shaun White Skateboarding fails to deliver. The control scheme is a hybrid of the Tony Hawk games and the EA Skate games. What you get because of that is just total confusion and frustration. You can either Ollie with the A/X button or use the right stick. You perform kickflips by pressing A/X and flicking the left stick to the left or by flicking the right left then right. It doesn’t work well either way you do it. I’ve been playing the Tony Hawk series since Pro Skater 1 and I’ve been playing the EA Skate series since the first game. I am really good at both games, but when I played Shaun White Skateboarding I felt like I was just doing heelflips over and over again. I felt like I had no real control over what I was doing and was just flicking the right stick in all different directions to build up Flow. I found this to be extremely boring and there wasn’t any challenge to the game at all.

The game itself feels really slow at some points in the game, while that makes it feel more realistic in the sense you’re not flying all over the place. The only problem is the game has you grinding rails that don’t exist, and tricking off ramps that appear out of nowhere. The game can’t seem to figure out which way they want to approach the situation, whether they want realistic or an arcade style game.

The voice work in the game is done well, but it’s extremely cheesy! Some of the worst lines I’ve ever heard in a video game. The citizens are truly the most annoying part of this game. They constantly repeat what they say, and at times even repeat what someone else said 10 seconds prior. Hearing things like “You’ve got a good eye, I wonder what the other looks like” and “Fight the power!” will make you want to mute the game. The music in the game is your typical rock, punk, and metal. Not a bad selection of songs, but the major problem is that there is no way to create a playlist of the songs. Meaning that if there are songs you don’t like in the game you’re out of luck and either have to listen to them or play your own music using the PS3 and 360. If I hear “I never wanna lose, I never wanna lose your love” one more time I’m going to scream!

The game looks like an early release game of this current generation. Nothing too bad, but nothing great either. The gray ministry controlled city looks depressing. I’ve never seen so many sad looking people walking around. Once you build flow and transform the city though is when you’ll see vibrant colors and crazy graffiti filling the streets. The city looks really cool when it’s full of color. The tricks in the game look like the real life counter parts. Every trick is done well and it looks like the developers really worked hard to make each trick look authentic. 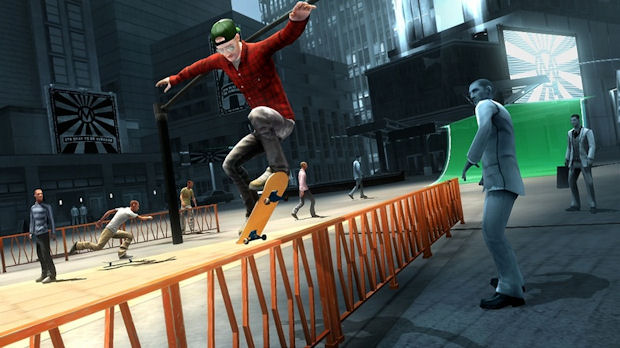 I honestly can’t say much about the online modes as I never got around to actually playing it. The game left such a bad taste in my mouth that I didn’t even bother with it. Sorry