A special night for Street Fighter.

Tonight in Las Vegas, Capcom will be holding it's Fight Club event featuring Super Street Fighter 4. So far all we know is that everyone will be playable except the unnannounced Third Strike characters and the yet to be revealed Hakan. There are going to be a lot of camera's, so expect to see lots of footage hitting the web tonight and tomorrow.

If you would like to watch live streaming of the event, it will start here at 7 p.m. PST and for you people on the eastside, that's 10 p.m.

It will be a good chance for members of the community to do some more testing with Adon, Cody and Guy, as well as see what balance changes have happened to the rest of the cast since the Fight Club event in New York went down a few months back.

They had 5 new flavors of fightsticks on showcase. This is the one I want: 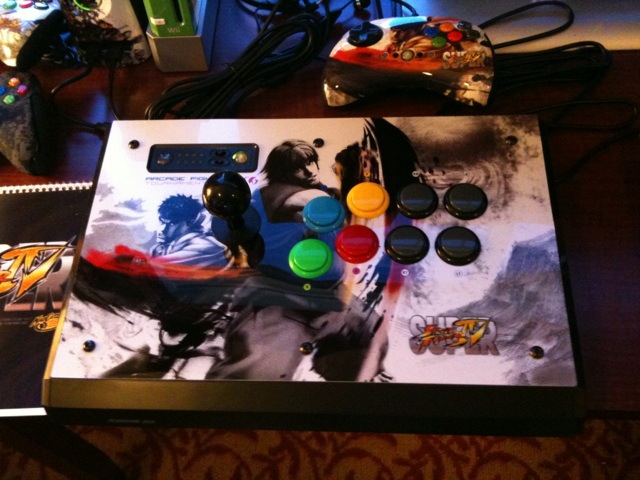 Info from the event: **Compiled by iplaywinner.com** A trusted member of the SF community said he walked right up to Seth and asked if there were any balance changes in this build of the game and he said, "No. It's the same build as SFIV just with new chars and new Ultra's." So any of these "this seems to be nerfed" and "this appears to be stronger" is all bull most likely.

* The biggest reveal is that Juri has a Custom Combo type Ultra, where she activates and is able to chain together attacks for a set period of time.

* It's not clear if you can juggle with these attacks or how much damage they do within combos.

* Has some sort of EX Teleport move? Not sure what it was exactly, but seemed to pass through attacks to the other side of the screen. (One of our readers points out this is a counter move which allows her to appear in various positions around her opponent. Combine this with her CC Ultra and she will be a real pain to deal with up close.)

* Very fast but takes a lot of damage.

* As previous reports mentioned, seems to have some dive kick/overhead attack. Was hard to tell what was going on the stream though.

* Guile receives Sonic Hurricane as his new Ultra which should help his ground game immensely.

* New Ultra, although not very flashy like his original Ultra, seems to work very well as an anti-air.

* New Ultra appears to be an air grab with a lot of start up.

* Not sure of Ultras proper application but most likely useful again projectile throwing opponents.

* Dirty Bull is a 720 Grab Ultra where he lands a head butt, steps on their foot and then knocks them out with a punch. Very similar to one of Steve Fox's move in Tekken 6.

* New Ultra is Kikousho fireball, much like her super from Street Fighter 3: 3rd Strike.

* New Ultra can be comboed from EX Legs from ANYWHERE on the screen.

* Knife seems to have incredible range -- not sure of practical applications though since he has to pick it up to use it.

* Lariat seems to have nerfed damage.

* Has his chain combos from the alpha series.

* His second ultra is a very flashy Gen-type move. Think "Raging Demon with the lights on".

* Appeared to have an air grab but cant remember 100%.

* New Ultra allows him to grab his opponent and blasts them with Psycho Power. Works like El Fuertes original Ultra or Alex's "Stun Gun Headbutt" from Third Strike.

* "Vega's ultra 2 is a slide, followed by a backflip kick and then a nasty slash at the opponent as they fall" - Kamano

* Has a new move that uses 1 EX Bar but is unknown what it does at this time, he stands there and fixes his hand wrap.**-We now know from Gootecks that this is a power-up move that makes his next uppercut stronger!

* Damage seems to be nerfed but hard to tell.

* Seems very fast, but many of his moves lost to T. Hawks specials.

* Seems to have a great set of high priority normal moves.

* Seemed like a real tank type character. Most of his normals did massive damage.

* A couple command grabs/super and/or Ultra and it was good night for most opponents.

* Seems to be a good character for people with poor execution but good zoning and mind games.

* New Ultra is "Shout of Earth" -- although it wasn't shown, it's supposedly a spin off of his Super in CVS2.

Watch as Gouken's new Ultra Denjin bounces this fool OFF THE WALL!