Community Blog: What characters would you like to see return to a series?

What characters do you wish would come back to a game series? Did one of your favorites get killed off, did the story change completely, or did they just stop putting that character in games?

First I'd like to start off with Geese" DOUBLE REPPUKEN" Howard. He hasn't been in a new snk game for years.

The mans a badass to say the least. He is from FatalFury and his attitude and fighting style are what makes me miss him the most. The version of Geese that I want returning, is one similiar to the CvS2 style. If you are not familiar with Geese, basically he had Gouken counters, air fireballs that push him backwards, and ground fireballs. He had incredibly strong normals and his super "RAGING STORM!!!!" is the best anti air ever. Besides his yelling, what made him so cool was he taunted you when he throws you and basically tells you your going to die before the round starts; "you cannot escape long death...." I would have loved to see him in kof12 (a long with 30 other characters,lol) and he wasn't included in 13 (doubt they will have DLC). Here to hoping SNKP use him in something. Heres a video demonstrating some basic combos with N-groove. Uplaoded by http://www.youtube.com/user/6248p

Second Character is Karas! The armored swordsman of Tatsunoko. 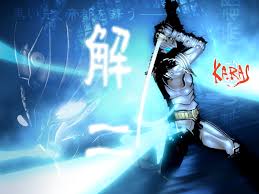 Karas was a popular anime and manga before his appearance in Tatsunoko vs Capcom. He is on my wishlist because even though TvC was an AMAZING game (and will always be one of my favorite vs games), it did not get really big, mainly because it was wii only and Americans don't know wtf Tatsunoko is. With MvC3 coming I don't think we wil see a tvc2 anytime soon...or ever. Karas was one of the lowest hp characters (next to Zero and roll) but his playstyle was beast. He has great offensive slashes with nice reach and quick jabs that allow him to combo into huge setups. His reflect projectile move and assist also could be used as an attack into his super combo. He had a counter super, one that rushes, and one that turns him into a flying disc, all of these perfectly transported from the anime to the game. What made karas unique was his chain attack, his srk and a dash atack that could lead into combos. His uppercut attack was not only extremely fast, but it could be done twice and went straight up very high. His chain could be used long range to hold enemies for assist mixups and supers, or to pull them towards him leaving them helpless. Despite him being "bottom tier"  because he got super nerfed in American version,I felt that if you used him right, he was unstoppable! Heres a short basic combo video for those of you that are unfamiliar.

Finally is the Zora people, from Legend of Zelda.

They where Fish people that played guitars made out of fish bones ; epic. You first encounter them in Ocarina of time, but Majoras Mask is where the real fun starts. Once you get the Zora mask, you become one of them and get to explore their world. It was just good fun. The outside world was big and interesting enough, but being able to swim to  new places was even more exciting. Obviously the new Zelda game coming out for Wii ins't having some sort of transforming link (that we know of), but as long as we get to interact with the Zora and travel to their world, I'm happy.Video of Zora link doing quests and stuff, uplaoded by http://www.youtube.com/user/SonicBlueSky

So what characters would you guys love to see return? Have you played these games/characters? Leave a comment below.