Turn the light off! Close the frickin' blinds!

The levels are a black screen! I couldn't see shit. Unless I turned on the ODST special visor. I don't want to play the game in pitch black! I'm mad, the levels that are day light or that weren't in the dark are amazing. All of the levels unfortunately are not that hard.

Legendary Railed! With 3 people! Maybe it's a little more challenging on single player, but that would be boring. Gorilla Warbear is Gorilla Tactics!

It was fun and it took about 6 hours to raip that shit.

Man of Ponage is getting railed right now Jimmy!

What the trade in value on this game right now?!

Marvel Ultimate Alliance 2 = MUA2 for you rehtards! Ok this game is unbelievable. Considering I was just playing that amazing Batman game last week. This is an absolutely terrible super hero game. It's just a beat 'em up, plain and simple and simple it is! The first time I played through it on Super Heroic which is the hardest difficulty you can select. The game did not challenge me at all! I beat it very quickly. I unlocked super ultimate hard. At this point I understood the game and the controls. I take any character that can fly or swing and just fly over the entire level to the boss fights. Ridiculous!

There are other "elements" the developers probably referred to, but they do NOT A GODDAMN THING for the game play. The puzzles are flat out dumb. All of them are just dragging something around on the ground to activate a switch. Who the fuck is testing this game? You have to realize, it's a complete waste of time and is not necessary for this game. Worthless! Fuck. Then there's the dialogue choices. It makes me laugh when I think about how stupid this is. The characters sound so repetitive. None of the choices matter other than to level your characters personality up and get an achievement. In the game characters talk to you, but your character doesn't speak you just select a text, but in the cut scenes everyone one speaks! I can't believe they didn't take the time to have everyone talk to each other, that would have been cool and more a reason for me to select good or evil with some characters. A good Juggernaut and an evil Captain America.

The story starts out leading up to civil war where Captain America goes undergound to fight Ironman and the U.S. Government. A cool story in the comics. About half way through the game that storyline ends and the horrible design of the game just goes into hyper drive.  No Hulk fight?! Maybe they did that in the first game, I don't know I couldn't get through the first two levels it was terrible. You just fight robots and dudes dressed in all black for the entire game. Some of the boss fights are cool, but fighting Yellow Jacket is not a highlight of the game for me.

A splash of my piss has better graphics than this game. Wolverine's claws just push the crates around, I have to switch to Penance and punch the boxes. WTF is a Penance?! Gambit has a giant nose!

I didn't like the first Marvel Alliance game. I had to play this one and I really did force myself at time. Now I can say with confidence that I have played one for worst games of all time. Some Jimmy in Los Angeles approved this as being a good game. This same Jimmy thought the leveling up system in the game was cool, but didn't realize you could just do auto level up and it doesn't actually matter. Wolverine, Deadpool, Juggernaut and Jean Grey just raip the shit out of the game. I destroyed this game and I did not have a super great time. 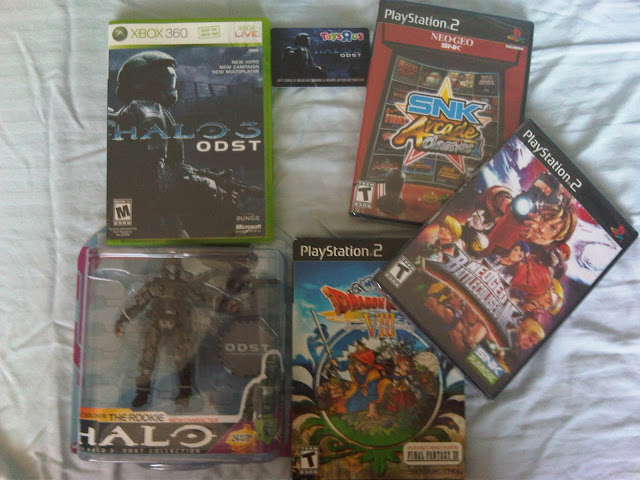 Mizucon 2009 is a little anime convention that takes place in Miami, Florida. Cosplay was a huge part of this years even and I saw a lot of great costumes. Infinite Bits provided an excellent game room where you could pretty much play whatever game you want to on any system. There was also a card battle room and a dealer room for some super cool anime stuff. Check out the video below.

XBox 360 Elite gets a rebate

Check out the official rebate page.

I wish I were making this up...

So every now and then you see something online and think somebody has to be making that up.  This, friends, is really one such fine example.  During a drug raid in March in Florida, detectives were caught playing bowling on Wii Sports during the nine-hour raid.

The Polk County sheriff, Grady Judd, announced that an investigation would be launched to look into the matter.  Further, he cites this as a "mistake".  Um...yeah; a mistake?  Did they accidently turn on the Wii, accidently pick up the Wiimote, and accidently start bowling?  This could, perhaps, be the most ignorant thing I've heard in a long, long while.  To make matters worse, did these detectives not know that they were being recorded by security cameras?  What level of competence is that?  Shouldn't detectives trained to do drug raids be able to recognize a security camera?   This is just another case of tax dollars at their finest.

Are there going to be PS2 and Dreamcast games available on the PSN?

According to some supposed notes from a SCEA/Sega meeting, it was discussed between the two companies that there was interest in bringing PS2 and Dreamcast games to the PSN.  The notes hint at Sega providing SCEA with a list of Dreamcast games that they're interested in releasing, and Sony will decide which ones they want as exclusives.  Furthermore, SCEA allegedly agreed to provide heavier marketing support for games that Sega agreed to keep exclusive longer.  Also mentioned in the notes, SCEA is interested in selling all PS2 games on the PSN.  There's no specific definition of all, but I can't imagine it being a very literal all.  In either case, the notes do seem to suggest that in some capacity, the PS3 owners may be able to get their hands on certain PS2 and Dreamcast games via the PSN.

My 360 doesn't want to play anymore

Trying to get online with the XBox live right now. My XBox 360 freezes everytime I sign in. If I disconnect the network, it works fine until I plug the network back in and attempt to sign on.

Oh, also the dvd drive won't open half the time. That's a new one. Had to give it the ol' clippy treatment.

I've done all the usual shit, erased my profile and recovered it (even done that on an old, formatted HD), cleared the cache, WTF jimmy? On fucking ODST day? FML.

Ok, so how should I say this as simply as possible?

Gouki.com LLC does not, has not, and will not sell, rent or lease your personal information to anyone, anytime, anywhere for any reason.

If you wish to log on and comment, we collect a username and password of your choosing, along with your email address. Your email address is used soley to provide your avatar picture via gravatar. It is not visible to anyone.

This policy may be ammended from time to time as new features are added to the site. (But we're still not gonna give your shit away, got it you jimmy?)

Is that simple enough?

You could find a million and one things to do that are more enjoyable than this game!

Battlestorm:field of honor is a team based old school style shooter in the beta phase for pc.  At first i looked forward to playing this game. The storyline seemed engaging, the artwork vibrant,the premise sound, but the game play was horrible starting with the game setup options.  Since the implemetation of windows live, I've gotten used to having the option of using my xbox360 controller, and if ever a game could have benefited from it's use it is this one.  T he keyboard configuration just seems weird and unresposive when playing Battlestorm.

My next complaint is the fact that this game is online only and because it sucks it took me days to even find others to play with, eventhough thousands have downloaded the beta!  That is never a good sign about the quality of a game.  If you plan on trying out Battlestorm you may want to invest in plenty of vodka and maybe order up some sexy escorts to pass the time while you wait in the lobby for others to join you !  Once you do get the required 8 players....no ther game won't let you start with less...hopefully that's a feature they'll be smart enough to change......you will need plenty of coffee to stay awake through the rather unispiring gameplay.

Hopefully this game will never see the light of day.........maybe they can send copies to all known terrorist and they will play it and committ suicide within a half hour of playing it.   i wish i could get back the time i wasted playing this game.  I would write more....but because i played this game i must now take psych meds to keep me from harming myself or others.  Please.......don't try this game unless they release it and sell it for under $5.00...anything more than that is absurd.

My review of Bioshock for the Xbox 360!

After I finished playing Bioshock, I knew immediately that I'd played an amazing game. That feeling after finishing a game where the game just sticks with you, I felt that with Bioshock. It was an incredibly emotional game. The mystery of the world of Rapture sticks with you long after the game ends. And yet, frankly, at first I had a hard time summing what it was that made Bioshock so amazing. It really left me at a loss for words, and I had to postpone writing this review for several days so I could actually figure out what made the game so amazing.

For starters the atmosphere in Bioshock is amazing. And by atmosphere I mean more than visuals. Sure, the visuals are amazing (a bit on that in a minute), but the whole game's presentation is just immersive and amazing. I don't think I've ever felt so totally involved in a game before. The world of Rapture is just so intriguing and well conceived that, despite it's obvious sci-fi setting, it seems almost plausible. The world is well developed; it's as if the developers actually mapped out every square inch of Rapture. The problem with all of this is that, while the city of Rapture is presented as being this huge underwater world, you really feel confined to the small corridors and buildings the game lets you into. A breathtaking opening cinematic makes Rapture feel huge, but you'll quickly feel disappointed once you find out you're constrained to the path the developers put you on. With all the attention to detail in the world, it's a shame that they confined you so much.