If someone didn't tell me it was fan-made, I would have thought Sony made it.

TreeFortProduction has uploaded a video that is amazing to say the least, called "Kids". It's a comercial for PS3 gaming involving children and teens being one with the game ; football player, soldier, person who can do flips etc. What makes the comercial so win is the fact that it looks like an official Sony comercial. The TreeFortProduction people did an outstanding job. check it out and leave a comment on what you think about it. Would you have thought of it to be fan-made?

Did you notice some of those characters? My favorite is the Robert and Yuri Skin for Dan and Sakura. Art of Fighting is still one of my favorite fighting games. Which ones are your favorites? Tell us in the comments. Don't be a Jimmy!

So I found this online today apparently its only a day or 2 old, its a fan made sonic 2 game which personaly I think is way better then sonic 4. Heres the free demo for the PC just DL and launch. (A lot easier to play with 360 controller)

Wheatly that fits in the palm of your hand! 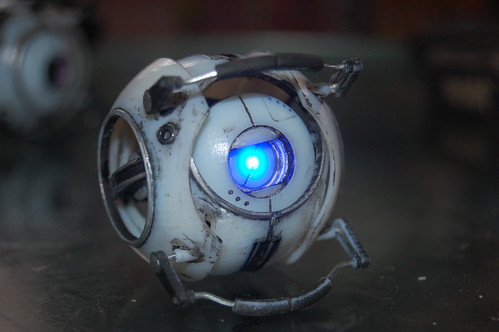 Youtube user http://www.youtube.com/user/ammnra is a crafty dude. He is the same guy who made the Rubix Companion cube last year, and replicates weapons from many other games. Today he brings us something a bit more relevant. Mini fan-made versions of Wheatly, Adventure Sphere, Fact Sphere and Space Sphere! They look like they came straight from Portal 2! Unfortunately he is not marketing/ selling them, so we can only watch in awe over the internet.

What do you guys think of his craftsmanship? Super badass nice to me! Leave a comment on what you think, or share any info on other fan-made stuff.

PonyKart another fan made game for My Little Pony

This was just released today on Equestria Daily. It seems that a new game developer has thrown their hat into the creation of a freeware fan game for the show My Little Pony: Friendship is Magic. This time it's Kart Racing.

Have a look at the PreAphla design. It's a very Mario Kartish style game that currently copies the graphic style as well. Being that this is an early build of a fan made game these visuals could change dramatically over the next month or two and more closely resemble the shows visuals rather than Mario Karts visuals. Still this is impressive stuff coming from a new start up in the Indie game developers arena.

Out of all the Real-Life Portal stuff, this one takes the Cake

Yes it is real! More ridiculously epic fan-made portal stuff has been made. This time it's one of those adorable turrets we are so familiar with. It has a legitimate motion sensor and sound bytes from the game, including the ending theme of Portal1.  The original video and info is here http://www.flickr.com/photos/ryanpalser/5724009217/in/photostream/

Luckily http://www.youtube.com/user/1242Jman has put up a Youtube version for easier viewing, enjoy!

Extremely impressive isn't it? The only downside to seeing these crazy fan-made wonders is the fact that they wouldn't be mass produced, and only the creator and maybe a close friend would have their hands on it. At least we can awe over it on the internet. Leave a comment on what you think about creations such as this.