Is this cult classic game from Treasure worth your 800 points? Find out in this review.

Praised for being one of the best game on the Sega Saturn, Guardian Heroes has been brought over to the Xbox Live Marketplace on October 12, 2011. Is this game worth the 800 Microsoft points ($10)? Let's find out in this review.

This game has a total of four different modes:

The game can be played with it's original gameplay mechanic, or a more, refined mechanic which they called "remix". both has their own unique purposes. when it comes to the fighting, you are able to switch between three plains (or as I should say, lines). That way, if you were getting ambushed by a group of enemies, you can switch to another line to avoid being attacked. Each character also has a  unique set of skills and spells that they could use. of course, using spells will cost MP. You'll be able to gain experience by attacking, using spells, making decisions in the Story mode, etc... to level up. As you clear levels in story mode, you can add attribute points to any stats based on how many levels you gained. Of course, the levels will reset after you beat the game, or if you were to get a game over.

When it comes to the sounds for the game, it remains unchanged. Composed by Hideki Matsutake and Nazo Suzuki, the music in the game is a combination of electronically composed tracks with electric guitar and saxophones, which is in my opinion, rather unique. Here's a track from the game for you to hear (and by far one of my favorite tracks in the game): 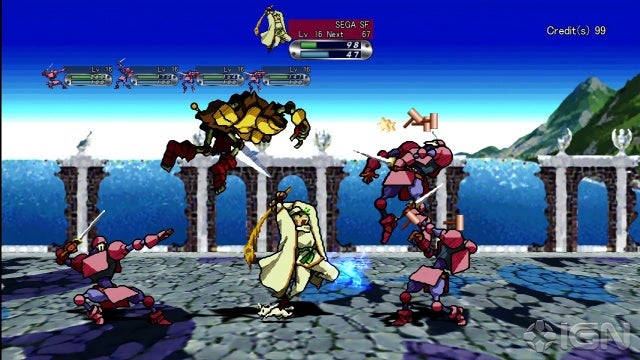 In terms of graphics, They did a really great job. the game has been reformatted from it's original scale to a 16:9 aspect ratio, thus expanding the playing field. The game offers both the classic and "remix" graphics mode, both of which runs in high definition with an updated user interface in both. With the remix graphics, they apply a hqx-like upscaling filter along with a pencil-shade effect on the sprites (which I think it's cool), true alpha blending, applies to the backgrounds bilinear filtering, and spells effects and character portraits are redrawn.

All in all, I feel that this is definitely worth the money. It's a fun game to play with a friend locally, and also a blast if you can find a lot of people online to go into a 12-person battle to the death. Other that that, I give this game a verdict of BUY IT!!!

Leave your comments in the bottom, and don't be a Jimmy!