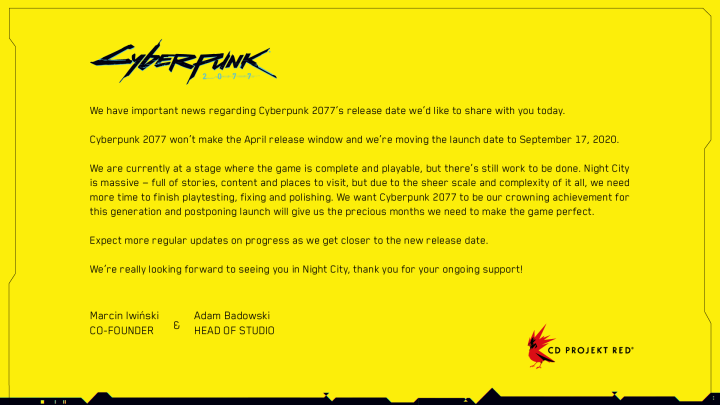 The second game on my list is Final Fantasy VII Remake. This game was only delayed a month so not that bad right? Everybody and their mother is going to be playing this game when it comes out and I’m sure Square is trying to get them servers ready. I’m certainly waiting for it.

You may or may not care about this too much. Marvel’s Avengers was supposed to release in May, you know that E3 dead zone. But it has been pushed back to September. I am not too hype for this game. I’m hoping to see better stuff at E3 and something to make me want to play it. Good luck with that though.

Finally today, news release of a Dying Light 2 delay. Unfortunate for fans of the first game looking forward to a sequel.

I believe that delays are never a bad thing. Somewhere in the development, someone discovered an issue with the game that left them with no choice. "We must delay the release!" was proclaimed. All of these games listed above are major titles coming in 2020 and I’m certain the team of professionals working on these titles don’t want to have anything go wrong with them.

As long as the new Halo doesn’t get delayed from it’s non-existent release date, we’re cool. Thanks for reading!