I give my review on Killzone 3 and what Playstation 3 owners should expect.

Killzone 3 is a futuristic FPS that is exclusive to the PS3. After completing Single Player and being hooked on multi-player I hope you find my review useful upon purchasing the game.

Brief Story Overview - In killzone 2 the ISA went into Helghan, pwned shit up and Rico went into Rage-Mode and killed the Helgan leader Visari. This game picks up right after that, You (Sev) and your bro Rico are fucked. Your small army is stuck on Helghan trying to find a way home, you must kick some serious ass to defeat the massive army of Helghast.

I really don't want to spoil it for you guys so sorry if this lacks info, it will mainly be a critique. Let's start with the characters. I really felt no attatchment to them. All the good guys and bad guys personalities are written on paper in a way. First few times you see them you can pretty much get a feel of how basic they are. Bad guys who want justice and to crush the enemy at all costs, good guys who feel like dudes in a bad action movie, just trying to get home. And the way the story progresses just feels like a typical action-adventure movie. I actually am more attached to the Bulletstorm characters, and that game isn't even serious. But the good parts of the story are definately a plus. You switch around from time to time being on foot, in mechs, jetpacks etc the list goes on. The different missions consisting of these all feel extremely fun and "realistic". You can feel the weight of trying to run in a mech while bullets ricochet off your screen while your buddies next to you in a jeep explode and the ground soldiers frantically try to find cover and snipe. also it is no walk in the park, The Helgast usually outnumber you and like to spam nades and rocket launchers while being at MUCH better tactical areas, this gives the game a more challenging feel opposed to walking around mowing dudes down.

Sound isn't something I would normally review, but it is that awesome in K3. The actiony-battle music is pretty intense and goes well with many fights, but the surrounding effects are the star. The way explosions sound when they are near you actually make you feel screwed. When your friend gets shotgunned in a nearby hallway you can hear the echo. The game is so action packed and fast pace things are constantly firing and exploding, the sound they delivered really gives it a rough war feeling. Ontop of all of that whent he action is settled down, you can even hear enemies trying to sneak up on you as they run up metal staircases. A very special part of the audio that I enjoyed in single player was the voices of the Helgast. Sometimes I just like to bumrush the building spray a room. Fuck that, at times you can actually hear the Helghast before you reach the room saying " Was that movement? GO CHECK OUTSIDE!", it is amaaaaaazing. Unfortunately a part I really loved was toned down. In beta when you brutal melee somone in multiplayer they let out a RIDICULOUS death cry, the first day patch tuned it down a bit due to complaints, ha. 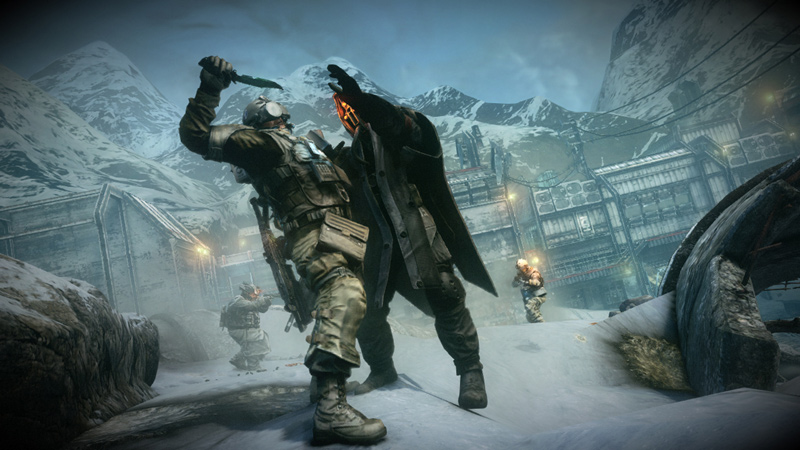 Definately uses the potential and beauty of a PS3, not much I can say here. The game does have a constant dark and brooding war feeling, but the visuals still shine and look stunning. Also there is great detail is buildings , uniforms/helmets and guns, you even have nice looking footsteps in the snow ;D. Dirty water and decimated cities have never looked so good.

Simply addicting. K3 multiplayer has 5 classes all with their own special abilities and weapon sets (3 primary and 3 secondary weapons). The game has a leveling system like most FPS and you take the points you earn to spend on your class. Leveling up the abilities and weapons on your favorite class is one thing, but the gameplay of it is win. All classes feel well balanced (a patch was done ) and they suprisingly work on every level. Even small cramped levels have a place for snipers, and large open levels have a place for Infiltrators. It isn't neccesary  but using a mic in this game and cooperating with teamates doubles the fun of the experiance. A long with all of that you are rewarded "Ribbons" for your perfromance. Ribbons give you temporary bonuses during the match such as faster reload or increased bulletdamage (the list goes on) for getting certain types of killstreaks or completing objectives. Also multiplayer delivers 3 game modes, all awesome in their own way.-

Guerilla Warfare features "body count" which is your basic team death match, whoever has more kills at the end of the timer wins, it is max 16 players 8v8.

Operations is more on the tacticle side. It has the objectives of Capturing and Holding bases, Assasination, Propaganda Carrier (like capture the bag) and planting/disarming charges. What makes this game-type so hype is that after each failed/achieved objective there is a cutscene involving the people on the teams! So after faling to disarm the bomb you might see you and one of your teamates getting blown off a walkway while your leader tells you how sorry you are, this is a max of 24 players.

Warzone is the longest gametype and my favorite. It combines Operations (without cutscenes) and Guerilla Warfare in a randomized order. First team to complete 6-7 objectives wins the match. It is definately insane.  Max 24 player.

For those of you who don't like to read-

In the end all I have to say is BUY IT! This PS3 exlusive is definately a must, it is a HUGE step-up from Killzone 2 (that many people hated) and is a wonderful FPS that will keep you busy.

Side note: If you are interested in DLC, it seems that they are going to stay with 2 maps for $5 pricetag.