It's time to get your mind jacked! Is this game worth your hard earned dollar? Find out in the Gouki.com Exclusive Review.

Let us describe Mind Jack for you in one word. That word would have to be “Awful”.

Mindjack is a game developed by Feel Plus and published by Square Enix. Which means already that the game is probably not going to be very good, but why is it awful? With Gears of War controls, Resident Evil camera controls, and classic Japanese story telling you’d think Mindjack would be a complete success. Well unfortunately it’s not. This review is going to be slightly different than the rest mainly because If I didn’t explain this game in a step by step manner, then you wouldn’t believe what I’m about to tell you.

Let us start off with the very beginning of the game. The cinematic is very much the same as in this trailer save the promotional messages.

After that is over the game then goes into the Mindjack press start screen. where your only option is to choose Rebirth. Hit rebirth and the game literally starts you to an empty room with 3 computer screens and a man. It is a basic tutorial mode, showing you how to move the camera and yourself. Then it teaches you how to mind hack, and bam achievement unlocked. Mind you I haven’t even reached the main menu of the game yet. Once I hack into the man standing there, they then want me to hack into a computer. Once that is completed bam another achievement and the game takes me to the Mindjack main menu. Now I can choose my options, setup, xbox live matches, or campaign. I chose the campaign and this is where the game just loses me. You start as this guy (Jim) in an airport terminal. You’re looking for a girl named Marie. Once the cut scene ends you take control of Jim and are tasked with following Marie. Note that at this point the only thing you can do is walk and roll. You reach Marie and a cut scene ensues where you start fighting some random guy, and to make things worse it’s the most action I’ve seen in the game so far and It was a damn cut scene. After a few more cut scenes the game lets you actually play. With a pistol in hand you’re tasked with taking out all of the enemies on screen. This is where the game is supposed to be fun, but instead gets worse. Mindjack is all about multiplayer for some odd reason. Even in your single player campaign anyone can hack into your game and join the enemy team. Therefore impeding your story progress, and stopping you from having a good time. I’m playing the game and some random guy jumps in my game (lv 14) and destroys me with rockets. Mind you I’m only a lv 1 character. What kind of bs is that? Once I died the game took me to a game over screen and I quit right then and there.

Read on further for the games full breakdown

Mindjack takes place sometime in the future where a new technology that allows people to hack into your mind is common thing in the military. You play as Jim some dude who can’t seem to stop yelling. You also have a partner named Marie, but is called something else. I don’t know it’s confusing. Anyway from what I gather Jim is getting his life back together and is now taking on missions for someone named Lilo. That is as much of the story as I know, because quite frankly I refused to play anymore of this game to find out.

The gameplay in Mindjack is very much like the Gears of war franchise. Aiming is done with the left trigger, shooting with the right. Running and Cover are mapped to the A button, and reloading is done with the right bumper. That being said, Mindjack has a great control scheme and it works very well. It can feel a bit clunky at first but within a few minutes you will feel right at home. It’s just too bad everything else about this game sucks. The mind hacking is just weird. You are fighting for your life and the next thing you know your down, and have to hack into a different body to continue. Hacking into anyone will automatically give them a pistol. So the lawyer who is cowering in fear during a shootout will get mind hacked and join the fight with guns and all. It just doesn’t make sense. The multiplayer component can be turned off, but the game stills plays as if it’s on. You could be in the middle of a firefight and then pause the game. The game shows that it’s paused, but everything is still going on. So if you take a bathroom break, be prepared to return looking at a game over screen. 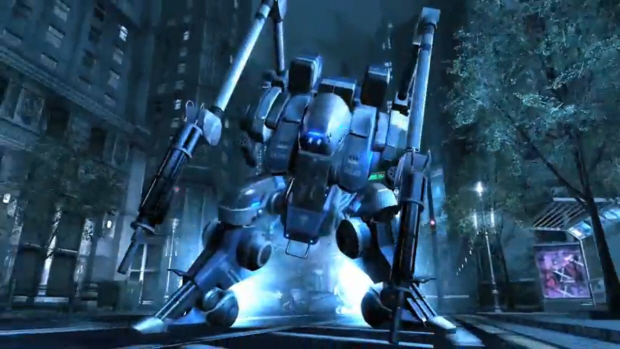 The game looks decent. Nothing too bad about it, reminds me of FF13 but with less detail. The character models are what you would expect from a Square Enix title. The environment is detailed nicely, for a game that is all about shooting and hacking.

The game has some of the worst audio in a game to date. The voice work is cheesy, and not to mention just boring. Jim is always yelling, but it sounds like he’s just talking. It’s awkward, and unpolished. When the two main characters are having a conversation Jim acts as if he is a football field away, and Marie talks as if she is right next to Jim. Makes no sense.

The online multiplayer is just dumb. There is no death match or capture the flag modes you would expect. It’s just hacking into someone’s single player campaign and either helping them or hurting them. Which means that the multiplayer will only last a week before it is a complete waste of time.

Mindjack is a complete pile of garbage and should be classified under the category for Jimmy Ass Game! Do yourself a favor and stay away from this game. Don’t try and play it, don’t try to rent it. If someone asks you to play it they are not your friend. It is one of the worst 360 games I’ve ever played. This is 2011 Jimmy! Square enix is losing it.