With all of the great games announced for the 3DS it was hard to narrow the list down to the top five, but here they are.

The Nintendo 3DS is a phenomanal system that has the capacity to be the best handheld made so far. Then only thing it's lacking from lauch is a set of really great games, but don't worry about that. They're on their way.

When I first got Blazblue for my 360 I couldn't get enough of it. I 1000/100- the achievements in about a week and a half and kept playing pretty regularly until about September of 2010. I got tired of waiting for the new character Valkenhayn to come out, and you may have seen my stories posted about him if you've been around Gouki.com for long enough. The game is fantastic and I'd probably still pick it up and play the console version from time to time if they weren't going to completely alter my mains playstyle when Continuum Shift 2 comes out. If I don't play the console version anymore the least I can do is pick up the portable verstion and support AKSYS.

With the 3DS's graphical capabilities I'm sure the sprites will look fantastic. Much better than that piece of garbage port they put on the PSP of the first one.

Having grown up without a Nintendo 64 I missed out on a lot of its gems the first time around, and this was one of them. I did get to play this game eventually and it's fantastic. With the 3DS version I'm sure they'll add in a save function though and I won't have to beat the entire game in one sitting. With the upgraded visuals and the 3D effects making me feel like I'm actually in an interstellar dog fight, this game should be one of the great titles of the console. Just as long as they don't change the cheesy voice acting. It's part of what made this game great in the first place. 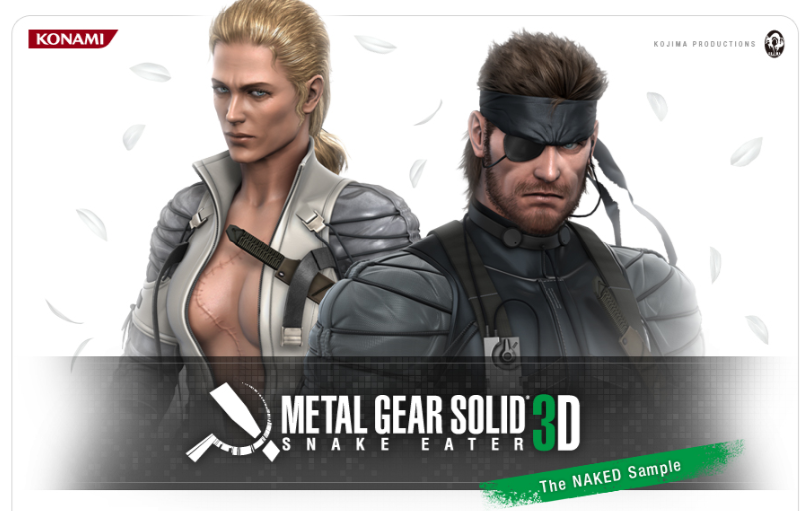 Hideo Kojima is a freaking genius. He can come up with the best and most convaluted storylines you've ever heard, but damn does he make it awesome. I love the MGS franchise, and if I had to pick one for them to put on the 3DS it would probably be Twin Snakes. But I'm not going to complain if what I get is Snake Eater. Since chronologically Snake Eater comes before Twin Snakes maybe we'll see a 3D remake of all three original games. The comparison screenshots between the 3DS and the ps2 version are astounding. The ps2 version looks like they took the 3DS version, ate it, and crapped it out the other end before selling it. If you're a fan of MGS this is going to be a must buy.

Tales of the Abyss

Tales of the Abyss is a ps2 game that I never got the chance to play, but being a huge fan of the Tales series it's one I really wanna check out. They're not doing anything fancy with this game though. It's more of a port than a remake with the same graphics as the ps2 version, but I'll take it. Tales of Vesperia has been my favorite tales game so far, but I've heard that this one is even better. I'll have to wait and see for myself, but it hasn't even been confirmed to be comig statestide yet. I guess we'll have to wait and see, but if it does make it over here you can bet I'll be getting it day  one.

The Legend of Zelda: Ocarina of Time 3D

I've always been a huge fan of The Legend of Zelda even since I was a wee lad. I used to play A Link to the Past every day after school on my SNES. But as I stated before I never had a Nintendo 64 growing up and I missed out on this game for a long time. It was only about 5 years or so ago that I actually got to play Ocarina of Time, and it was instantly turned into my favorite Zelda game of all time. It's a got a charm about it. All of the characters, environments, and sounds come together to make an unforgettable moment in time. You've got the Goro's and the Zoras. You've got the frustating water temple. You've got Navi's annoying as voice yelling at you every 5 seconds. You've got amazing bosses and a great story. At least in my opinion. It may be a "remake" of a Link to the Past, but you know what? A link to the past was good, but Ocarina of Time made it better. When this game comes out it will be getting a TON of playtime. Not to mention it comes out on my birthday, June 19th. Which just makes this releast all the more better.

Even though everygame on my list is a remake or a port of some other game I am still excited for some of the original games coming out for the 3DS. They just didn't make the top 5 list. Paper mario, Mario Kart 3D, Super mario 3D, Kid Icarus: uprising, and Kirby 3D are all going to be great. And that's just what's been announced so far. If support for the 3DS stays this good I'm not going to have to worry about having a good portable game until the new handhelds come out in 2018. Give or take.