Video: Uncharted 3 Multiplayer and How to get in the Beta

Uncharted 3 Multiplayer has some very unique features, like nothing in any other game to date. Once again NaughtyDog may revolutionize gaming. Also a How To get in the exclusive Beta in June. 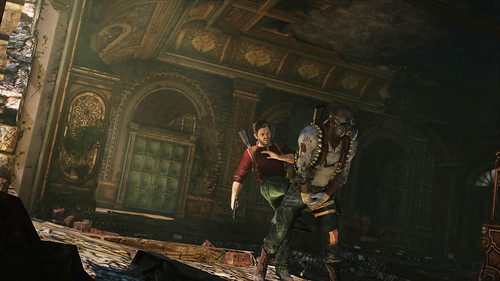 Let the groin kicking begin. Sony and Naughty Dog have released a ton of new information for Uncharted 3 Drake's Deception today. It's all about the Multiplayer. A little background here, I played the multiplayer for Uncharted 2, twice and didn't like one second of it. It seemed like something just put together real quick, so they could say they had a multiplayer. This goes in line with other games that have added multiplayer, even though the game didn't need it all, the Nubs demanded it. Bioshock 2 is a classic example of a game that didn't need multiplayer.

Uncharted 3 wants to show you something completely different.

Bonus for the music selection. Great song for a great video. Not enough sound from the game is the only issue here. But I'm sure it sounds great. There's ton of explosions and a lot of action on screen, something the PS3 does so well. It's unfortunate very few developers know what to do with the PlayStation. Some of the new Uncharted 2 deatures like the Medal Perks sound like a cool idea:

You have to option to select a specific Medal Kickback, which activates when you’ve racked up the required number of Medals for that specific Kickback. You can see this in the Multiplayer Trailer when the RPG Kickback is activated at 00:50 into the video. You’re taking a little chance when you select these, as some really choice Kickbacks require you to get a significant number of Medals before you can activate them.

So with your typical loadout selection, main weapon, side arm, perks and bonuses, you will also select something for medal kickbacks. The cooler the shit, the more medals you gotta collect. The vertical levels of Uncharted seem to be way more invloved with this multiplayer version, you can see in a few clips, Jimmys getting grabbed and thrown off buildings. It's gonna be sweet if it's a smooth motion of climbing and running. Hardcore Parkour Jimmy! No game has successfully done that yet. We're all waiting to see what happens with Brink, because Crysis 2 Multiplayer sucks.

Some of the game types seemed to be outside of the box. Some of the map desgin is certainly something you've never seen before. Power Plays change the end of the game and sudden death in Uncharted 2 is one of the most exciting things from all of the news today.

If matches are too close to call as they get close to the end, Overtime will activate, giving either time an opportunity to win the match by more than one point within a limited time. If the game is still too close to call, the match enters Sudden Death. Sudden Death is similar to Elimination – there are no respawns and the last player standing wins the match for their team.

That sounds awesome right? A winner will be decided by the last man standing. I wish other games had done this. As far map design, on the airstrip, one team starts on a plane going down the runway and the other team starts on a bunch of trucks chasing after the plane, you can see that in the video too and it is just bananas.

Now lemme go back and talk about the games types. I've watched this trailer like 4 times now and yes, the song is a quite addicting, but I really wanna test this game out too. Three team deathmatch, vintage Halo Multi-teamesque, but 2v2v2. Free for all, which is classic FFA. These two game types will be available on the beta. More info on game types and other features for Uncharted 3 (Including the sad face social networking experience) will be released at a later date.

Want to play the Uncharted 3 Drake's Deception multiplayer beta? There's only two ways to get in as of right now. Be a member of Playstation Plus and get early access to the beta or purchase a copy of Infamous 2. The beta starts on begins WORLDWIDE on June 28, 2011.

Thanks for reading. Please leave your comments below.