Here is another game that I was super hyped for, but as time passed I got worried it would be a crappy game. So I held off on buying it, but thanks to Gouki.com I got to check it out. Lets start this off by saying I am a big fan of Marvel.  Unfortunately their games just don't compare to the likes of the Batman series.  But when I heard that Marvel was working on a game where you were going to be playing a mutant coming into their powers I couldn't believe it.  Of course I start thinking I'll be making my own character, wrong.  Then we hear that you will make choices that affect the story, kind of.  But as a true fanboy I had to give it a chance.  And Gouki.com made it happen (thanks guys) and I'll be looking to return the favor to one of my fellow jimmys.

After a combo of a motion comic and a short video clip that give you an idea of what's going on I was ready to start the game.  Like Goukijones I started with Aimi the asian girl.  I did try the guys afterwards just to see how it affected the story and to use all 3 main powers.  They each interact slightly different, but not enough that you really feel like their is a replay value. 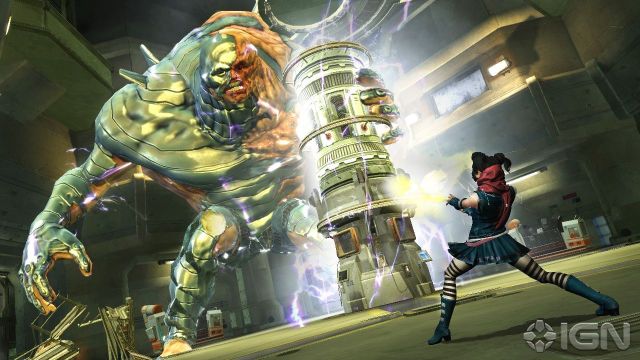 After you select your character you get a little clip to fill you in on their story then all hell breaks lose as a rally gets attacked.  You are then given the choice of the 3 power choices.  And unless they add more by DLC that is all the choices you get, Density Control, Energy Projection, and Shadow Matter.  I went with the third choice and after trying all the powers it was still my favorite.  As you get farther into the game you get options for expanding your powers.  Giving you 3 attack and a constant effect.  Really lacking considering the wealth of powers available in the Marvel universe.  The offer X-genes from a few mutants and they also come in sets of 3 to augment your character's powers.  you get to switch them out and and can mix and match them.  If you put a full set together including a suit that changes your look you get access to a bonus that in most cases is useless.  All of these parts are random so you can end up unable to put a full set together for most of the game.

So lets get on to what should have been the driving point of the game, the story and how it changes.  You get to decide on following the X-Men or the Brotherhood.  This is done through a series of choices on side missions.  Well to be fair they aren't so much missions as little battle arenas.  You can help both sides in most cases with only a few times you have to choose between the two.  This is when you will interact with the big names, and a few that are less known.  But for some reason they half-assed it.  You still do the same basic story either way with just a few changes thrown in.  This was a major let down.  Why put the time in to make a great game when you can sell it for the box and name on it?  Well that fact that you have good games to compete with.

The game gives you almost no room to explore, you can look around corners to find x-genes and collectibles, but you won't wander far.

The first play through I went X-Men, then Brotherhood, then mixed them together.  Unless you want a few minutes of face time with the other team the only other pay off is you get a pat on the back from either Cyclops or Magneto.

After you finish the game you can play a new game + using the same character with the same power and keep the stuff you gathered.  Or you can start from scratch with a new character and basically get nothing.  When you get to your second play through you will want to skip a lot of the scenes, but that just isn't an option.  If they want to add to the game they need to patch that.  Let's not forget that you don't choose when to save, the game does it on it's own at pre-selected areas.  Many of them right before a long cut scene.  As was mentioned before this is a very short game. In about 4 days i beat the game 4 times and unlocked everything.  when you compare that to the nearly two hundred of hours I've put into Disgaea 4 and the amount of stuff I have left to do in the game it feels pretty crappy.  Luckily the price is dropping fast and even better for me and one of you the game can come just for being a good jimmy.

I enjoyed the game some, but kept thinking about what it could have been.  I'ld stick to renting it if you are a Marvel fan, or have a kid who is since my 7 year old was able to play it with very little trouble.  If you really want to have it sit on your shelf wait until you can get it on Amazon.com or Gamestop for $10 or free as part of some deal.  And trust me it will be there sooner than you think.  Or you can comment on the story telling me how much of a fan you are and why you want the game.  It is a copy for the Xbox 360 and it could be heading to you.