Exclusive: Here's another quick look at WWE Apostrophe 12. Randy Orton VS Alberto Del Rio off screen. What I'd really like to point out is the sad face of what sounds like the announcers not having any NEW commentary. Again, this is only the E3 2011 Demo.

We've known about Cole (from inFAMOUS) for a while now, but here comes some new challengers (at least on the PS3 and PS Vita).

I think the old, fat Mega Man from the original's box art is hilarious. The Pac-Man is ridiculous, I don't even know what those small things are (what game is that from?). Cole looks interesting. I wonder though, since none of these will be playable on the Xbox, will they be allowed in tournament play? If not, they are all fn irrelevant.

How much would you pay for this experience? Sony's asking an awful lot.

ON the show floor at the 2011 CES, Gouki's own FnJimmy plays Killzone 3 with the new Sharp Shooter Move gun in 3D. I put on the second pair of 3D glasses ($150 each MSRP) to see what this game could do. I've got a big head, and was wearing my glasses that day, so the active shutter glasses were not very comfortable to wear. I'd hate to have them on my head for more than 10 minutes. The 3D effect was decent, though it broke if you tilted your head. Overall, it didn't add too much to the game. I got the feeling that having it in 3D would help you aim with this accessory as you could line up your  target through the reticule better. I didn't get to play the game, so I'll let Jimmy explain his feelings in the video:

FNJimmy goes hands-on for the first time ever with the Sony Playstation 3 Sharpshooter peripheral. Can FNJimmy dodge bullets while taking an onslaught of questions from Cinderkin and goukijones? Watch this exclusive footage of Killzone 3D from the Sony booth at CES 2011.

FnJimmy Demos The King of Fighters XIII at EVO 2011

This was just after we played the UMvC and I was already exhausted. Anyway, the random black guy was turtling.

I don't know about this game. Comepletely different pace after just playing Marvel.

Everything I've been seeing about this game -since I played almost 2 years ago- has been detouring me quite so. This video however kinda put a little bit of hype in me. PvP looks pretty fun in SWTOR. Where the fuck is my beta access or early access whatev.

Evil Ryu and Oni Akuma have surfaced! Check it out! NSFW Jimmy!

Offcast has a ton of gameplay footage archived. Check it out. Absolutley amazing. Below is some information on the two fighters. 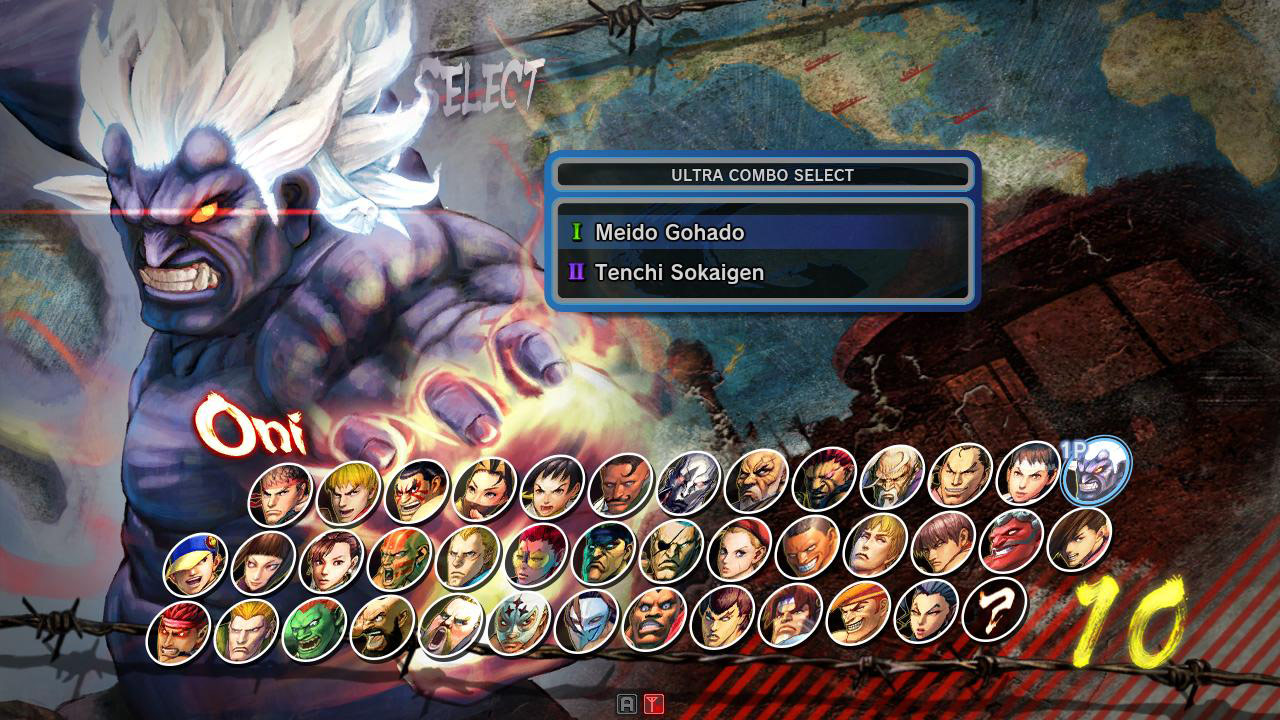 • Has a new teleport/air dash move by doing quarter-circle back + 3x Punches. Can be used to avoid anti air moves, among other things. Seems to have some recovery on it, though. Overall, seems to be a GREAT move.

• One of his attacks makes him leap into the air and come with a stomp/body attack, think E. Honda's Sumo Splash. There's an EX version of this.

• He has a Shoryuken (Dragon Punch) and Hurricane Kick. Shoryuken seems good at times, others, not so good.

• His 'Gouken Palm' special crosses up and it might be fireball invincible. It's unsafe on block, though.

• Demon Flip is a really good anti air from some ranges.

• Super is a Raging Demon.

• Ultra 2 looks like Akuma's Ground Pound Super Art (Kongou Kokuretsu Zan) from Third Strike if it whiffs or partially connects, but if goes into the full animation Oni jumps into the air and finishes with a huge Shoryuken with a lot of flashing stuff on screen.

• Can combo his Ultra 2 off his EX Slide Dash move.

• Can do air Ultra fireball... possibly for chip damage. 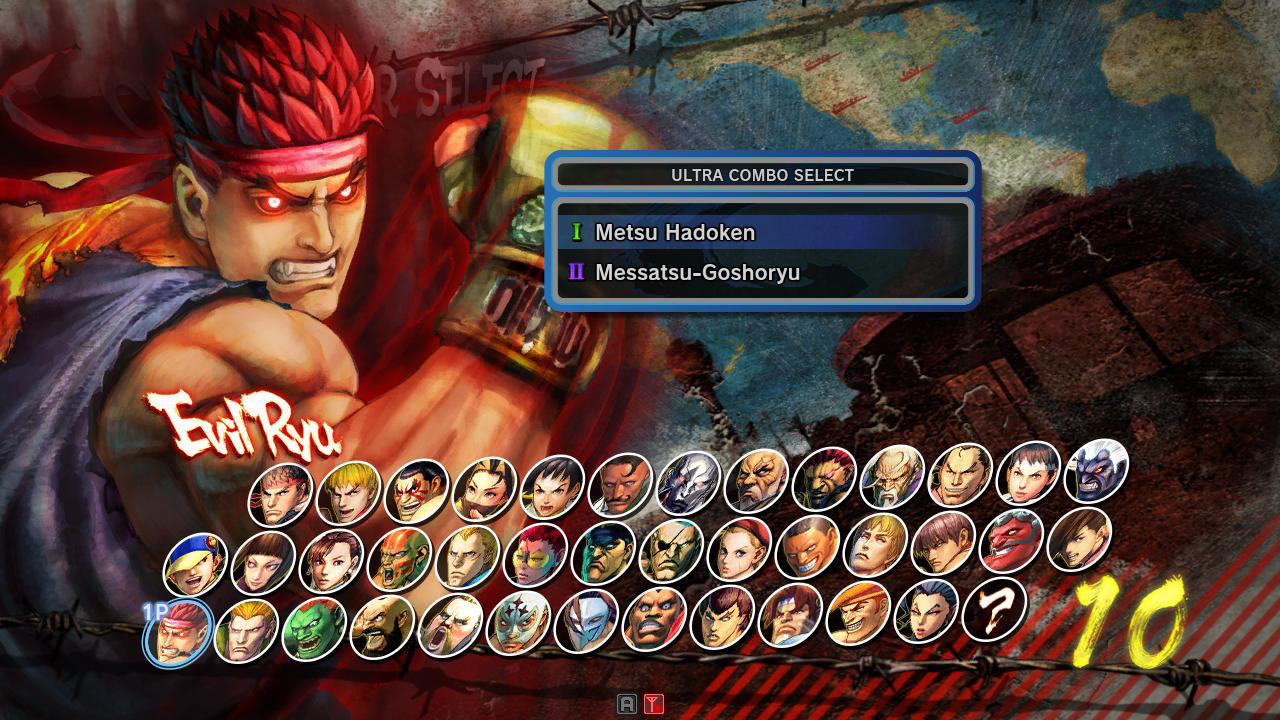 
• Evil Ryu's most closely resembles Akuma in Super Street Fighter 4 Arcade Edition. Many of their moves are very similar. A few examples: Far Standing Hard Punch is the same, Crouching Hard Kick (sweep) is slightly slower, Hurricane Kick can juggle into a Shoryuken and it doesn't break armor.

• Akuma's Fireball, Red Fireball, Shoryuken, Hurricane Kick, Dive Kick and Teleport all look to be pretty close to what Evil Ryu can do. It looks like many things Akuma can do, like cross up Hurricane Kicks and core combos, so can Evil Ryu.

• He definitely has low health (stamina), probably some where around Akuma's, I'd guess 850. Two wrong guesses can lead to a dizzy from some characters.

• Can combo into his Ultra 2 with Crouching Medium Kick into EX Fireball FADC, Ultra 2. Full animation will land. Sick.

• Evil Ryu's Crouching Medium Kick is like the one in Third Strike, pretty good, but slower than Ryu's and you can't combo into it from Light Punch.

• His Super is a Raging Demon.

• Ultra 1 is a souped up Fireball. This mostly closely resembles normal Gouken's Ultra 2, as it appears that you can charge it up and then release it.

• Ultra 2 is a Metsu Go Shoryu uppercut which he hits you with three uppercuts: flies into the air and charges evil energy... and slams you're face into the ground with it.

• Toward + Medium Kick does a lunging Hop Kick, but it doesn't hit overhead.

• Red Rapper offered this opinion on Evil Ryu: "It's all about risk reward. He [doesn't make] Ryu obsolete. Essentially, you're getting a different version of Ryu who does more Damage, but in return takes a LOT OF DAMAGE. His c.MK is better or worse in some ways, but he has some cool tools that could help out against normal Ryu's bad matchups. However — he's for sure not overpowered. No way."

Very cool character, though. Tons of fun to play and a nice vary up to normal Ryu's style."

What do you Jimmys think? Are you excited to play these two characters? Tell us what you think in the comments.

Coming March 21st, 2014. Like the previous games in the inFAMOUS series, Second Son gives you the option to use your powers heroically or ruthlessly. The path you choose will affect every aspect of the game, from character relationships to powers development to the story itself. In this preview play through, Delsin has convinced Fetch Walker, a Conduit with the power to control neon, to help him take out a group of anti-Conduit protesters. With Delsin's influence, Fetch is willing to exterminate the "haters" and anyone else who gets in their way. ENJOY YOUR POWER.

Hopefully you know, I did not like FF13. Very linear, no fun leveling up or equipping your team. I watch a developer demo FF13-2 at E3 this year and he looked bored out of his mind, just hitting the same 1 button over and over during combat. Not Hype.