#poorsimcity This game is so broke. Nobody can fix the traffic problem

EA released a new video showing bridges & tunnels. This is great, doesn't look like it's going to help in any way to alleviate your traffic problems. The "Sims" will still take the shortest route possible.

I'm so mad about this game. It's 1 of my favorite series of all time. It's 1 of my first childhood memories as a gamer. This new version was an absolute travesty. I haven't played in months. All of the add-ons released for it cost ridiculous amounts of money & from what I hear break the game even more. I'll load it up again 1 of these days, but I can't make any guarantees when I see videos like this. Tunnels & brigdes to nowhere? Really?!

Sim City. This game is broke right? How about a FFXIV type makeover.

What sort of odd love hate relationship do I have going on with the Sim City? I don't have a clue, but I'm gonna just blither & blather about my experinces the last 2 week. I have a special video for you & some great pics.

The first 3 or 4 days after I received the game -it was on launch day- I couldn't even play by myself. Finally about a week later most of the server issues were fixed. Most. I've only ever been a multiplayer game once. Then I couldn't get back onto that server & never found that game again. So so much playing with other people. I've built entire regions by myself now & I know I am missing out on playing with other people. That pisses me off. There's no filter to search for games or even a queue to get in line for. Shit, I'll was days if I have to just to get into a game. There's a list of games to join, but every game is always full. You can scroll thru them & I've been all the way to the bottom. Oh, there's a few open games in there, but when I click on them, it tells me I don't have the right version or something to play this city. NICE!

All the text pouring out of me & I haven't even started to talk about how broken the actual game is. Once I kept getting warning that Sims won't travel thru my town on the train because it was connected to the region. Ok, I build a second train station & attach it to my infrastructure. Nothing. No Sims coming on the train. As I look closer, I notice that the track is broken on the OUTSIDE of my boundary. Nothing I can do about that.

Another time I'm told that train service has stopped: 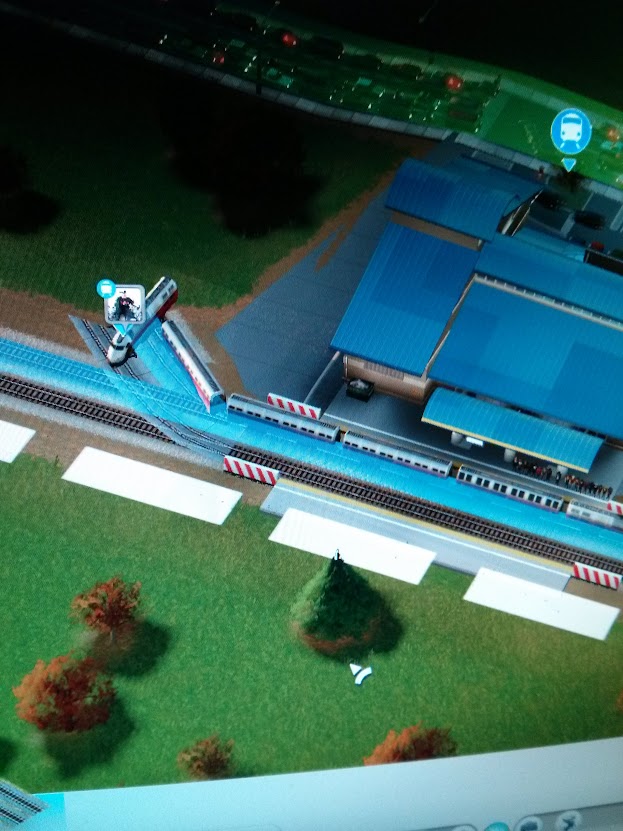 Yeah I could just bulldoze that piece of the railroad, BUT that would also blow up the train station & I didn't have another 40k to rebuild the train station. Deal with it the game says. Roads & tracks & bulldozing is a whole-nother-shits. Bulldozing anything next to a road destroys it. That $90,000 police station you just built that is 1 square to far to the right & you can't connect your road to it the way you want. You're fucked. Deal with it. No do over or undo button in this Sim City.

The graphics are great & they just break sometime. They also really slow down when too much shit is going on at once. One of my favorite features is the real time charts & graphs you can look at the overlay right on top of your city, but if you're looking at the crime date & have the trade graph open & there's a 100k+ Jimmys in your town, the game is gonna slow up a lil.

Look carefully, first there's a train track that goes right into a dirt wall. (All of the traffic is so fucked up) Second where the fuck did this mountain come from & why is there building on top of it. It gets better you see the Trade Headquarters right next to it?

Yeah for some reason this town was fucked & buildings were building on top of other buildings. I can't believe I just typed that. Look at that straight up dirt mound. Sims would come out of that building & just fall down to the street. Look at the building next to it from the picture above. It's a full-on luxury tower with Sims coming out & driving right off the cliff to go to work. Not to mention that train that blasts thru that dirt wall every few seconds. Eventually I abandoned this town.

Other graphical issues. Some building would just wig out.

That building shouldn't glow like that. You can see my cursor over something else.

You also get these roads to nowhere that are jam packed with traffic. Trains would do the same shit.

Going back to how fucked the traffic is sometimes. There is only 1 way in & out of each city. You can see traffic backed up for miles outside of your city. So far I have been terrible at trying to funnel the traffic into the city. It's not like managing actual humans tho. In Sim City the Sims just go to the first house, job or shop they see. They have absolutely 0 personality. It's like the Matrix they are just running a program. This system works great for the service, but not at all for the Sims.

I was actually just playing just now & completely lost what I was doing.

My most profitable city was LOSING over 20K at 1 point.

Mostly becuase I got on the Ore & Coal train right away on this city. You can see 5 mines working at once.This city died eventually ran out of water. WTF am I supposed to with no fucking water in the entire region?

We discuss Generations 1 Fighting Game Tournament at Insert Coins & other ridiculousness from the world of Video Games. There is also some FSW chatter. How terrible is EA with releasing games? Just ask GoukiJones about Sim City ...

Sim City is 1 of my favorite games of all time. The Limited Edition is FREE with Pre-order, courtesy of EA.Check out this new trailer.

SimCity Public Service Pictures presents How to Deal with Disasters. In SimCity you never know when disasters will strike!

Everything about this game is amazing from the ease of constructing roads to the intuitive way you handle power-plants and sewage. I idea that everything you do will have real future consequences, like where you syphon your water or where you dump your sewage makes planing for your town all the more critical.

I personally can't wait for this game to come out. The last time I played Sim City was on my SNES and I remember being so addicted to that game that I'd spend hours just watching looking for small changes in the mood of my population. This looks to turn it up about  300 notches and make for a very hyper-realistic environment for players to build their dreams.

Sim City World Trailer - How will the multiplayer work?

A new video from Gamescon showing how the multiplayer will work in Sim City.

Sim City How to sign up for the Beta. What's a Dxdiag File?

Sign up now for the Sim City beta. Fill out a quick survey and upload your Dxdiag. WTF is a Dxdiag you ask? Don't worry, I had to ask BatRastered to show me how to do it. I'll show you too.

Isn't that pretty. I'm sure every step toward building a town like that is amazing fun. Can't wait to lay some pipe in Sim City.

To sign up for the beta head on over to http://www.simcity.com/en_US/beta/info log into your EA account. Create 1 if you are a nuab. Then click sign up for the beta. The very last part it asks for a Dxdiag file. With 0 instructions on how to get this file. Luckily BatRastered was sitting right next to me and explained.

Step 2 Click "Save all information" Save it to the desktop or where ever you want Jimmy!

Step 3: Drop the file in your survey and click send.

A quick look at the NEW Sim City building simulations

One of my favorite games of all time man! So I'm going to be posting and commenting all the way up to the release. Where you will probably not hear from me again for a while.

Fucking agents man. And minerals in the Earth. I'm SUPER hype for this. Watch the part with the Jimmys building and moving into houses. I don't know, but watching building rise in Sim City is very addicting. Don't be a Jimmy!

Sim City V and it looks amazing. Can it be real?

Some Spanish website got some info from some German magazine about a new Sim City. These images are amazing. We'll know more hopefully with an official announcement at GDC.

My history with Sim City. It was one of first PC games I ever remember playing back in school. That and Camren San Diego. I hated that shit. I was always on the other side of the planet from her and Jimmys were mocking me. Anyway, building cities. I love to build stuff. I still play Sim City 4. Rush Hour. I was worried that there would never be another Sim City. One, because EA loves to butcher everything. Maxis is still alive, don't worry and these new images show something amazing.

Outstanding isn't it? Make sure you HYPE up Sim City V in the catalog. I did.

If you want more information, check out the story source and use the Google Translate. Don't be a Jimmy!