For anyone who was upset that their favorite video game is nothing like the live-action Hollywood version. Well, here you go...

The movie isn't looking bad.  I loved both of these Tomb Raider remakes.  Looking back now I remember both being very similar, but they were both very fun.  This game had a ton of collectibles and it's one of the few I tracked everything down and got 100%. 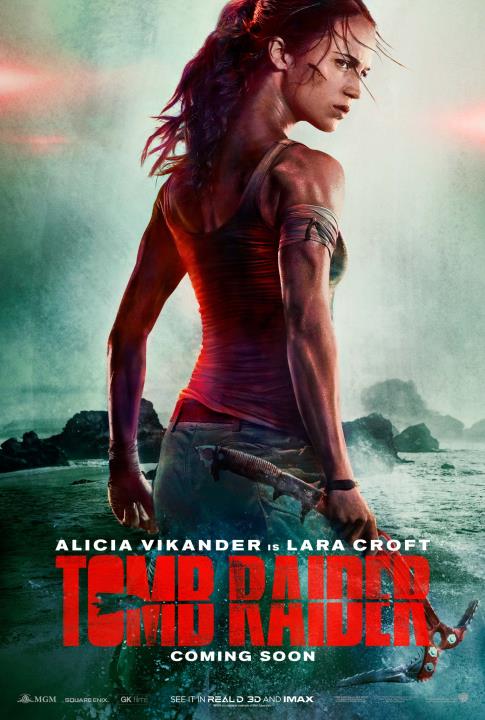 Lara Croft murders people like it's nothing. Is this why the game has been around for like 20 years? I enjoyed this year's relaunch & this video is just like the game. Kill! Kill! Kill!

Starts off as your typical horribly acted slow dramatic start. Then the shit hits the fan & Lara murders everybody without thinking twice. Just like the game. 0 remorse. Pretty cool.

GoukiJones reviews Tomb Raider (2013) After he beats the poo out of on Hard. Get's 100% & plays a little multiplayer. Check out these exclusive videos & pro-tips.

So what do we have here, the new Lara Croft? Oh I don't care about that shit, never really played the old games from back in the day. What? This is an open world adventure with leveling up perks & enhancing guns? Okay, I'll try it out.

Turns out, I love this game. I'm saying right now, in May, Tomb Raider is Game of the Year.

Basically what is happening here is, I've killed everything in the area & I'm looking for the treasures & documents & GPS thingys hidden in this area. Those of you familiar with Borderlands know how something are hidden in areas & they don't really tell you what they look like or where they are. Tomb Raider has the same shit. Eventually tho, Tomb Raider will show you the location of most missing items & Lara can use here "Survival Instinct" aka Detective Mode to spot important items/animals & other shit in the wilderness.
I don't know what you are watching here. This guy either timed out & died or I killed him by jumping on his head Mario style. The combat is the worst part about the game unfortunately & I have some more videos, that are gonna make you shit. Don't worry about the combat too much, there's much more to do.
All of the climbing & level design is brilliant, really fun to run around & look for all of the secrets. Lara has great control when she is jumping. Like you can turn her around in mid-air & she sometimes gets a little extra float if she's trying to grab onto something from a long jump. Plus she can get on top of most things. She could definitely get on top of me. What? I like any game where I can climb to the top of that giant structure in the middle.
So I played the game on Hard. I don't fuck around with games on Easy anymore. I think it's a waste of time. Playing games on easy where enemies just fall over & you thru the game too fast & miss what half the levels look like because you're too busy just blazing thru ... yeah I don't like that. Plus combat is my favorite thing, it why I play most games like this. Is the combat like Drake's? No not all. 1: Lara doesn't have grenades. EVER. 2: the enemies are DUMB AS FUCK.
The clips of the AI don't get any better unfortunately, they glitch out sometimes, they spawn, despawn & respawn right in front of you. That's Jimmy ass!
Pro-Tips:
0:06 Spawn in front of me.
1:21 Respawn right in front of me. :(
Okay so maybe I spent a lot of time talking about the stuff I didn't like, but mainly it's just the combat & that's too bad. Hard doesn't really do anything. There isn't even an achievement for beating it on that difficulty, so it's not like I can every prove my accomplishment. As far as getting 100%, there's an perk you can unlock that shows the location of every hidden item in the game. Fallout had something similar.
Watch these Jimmys just walkthru the wall. No problem.
So despite the stupid AI & the poor combat, Lara Croft is still fun to play. The level design is great & the tomb raiding, did I forget to mention the tomb raiding? Yes there is actual tomb raiding. There's like 5 or 6 of them in the game, maybe more. They are just puzzle rooms or challenge room like from Batman. This all good stuff too, I just wish there was more.
Oh wait, there is! There is Multiplayer. This is another copy of what Uncharted had, hell even when the characters are waiting to start the game, it looks just like Uncharted. I played 2 games of this. The first game I came in halfway thru & of course had no idea what was happening. In the second game, the game froze. The Xbox just couldn't handle all of the thunder & lightning. I guess I'm not missing much here tho. I haven't played Lara Croft since & that's because there really isn't any reason too.
It's still worth your money. Shit we got it for $35 bucks! Stolen! #dealsjimmy

Tomb Raider: Ascension? Video of What Could Have Been?

Tomb Raider was rebooted this year with it's latest title, but before that we almost got Tomb Raider: Ascension instead. Check out the footage.

The footage here looks like a mix of Shadow of Colossus and Resident Evil, with a touch of Dead Space limb damage. The video shows Lara riding a horse, leading a girl around with a carrot it seems, and other features that didn't make the cut in the new Tomb Raider.

While I enjoyed the new Tomb Raider's single player campaign, I think adding multiplayer to the game was a mistake. Maybe if they had pulled MP we could have seen some of the features.

What do you think of Tomb Raider Ascension? Is this something you would have like to see in Tomb Raider? Is this a better direction for the franchise? Tell us what you think in the comments. Don't be a Jimmy!

I said this to BatRastered last night. Look at the grpahics in Dishonored and then look at the graphics in Tomb Raider. There's a serious problem with Dishonored. Tomb Raider however is looking like the female Nathan Drake and I'm very hype!

She looks great! With this game being a reboot, or telling of origins of the series, how will the story unfold for this archaeologist?

Honesty, she looks great before the breast implants! :D