Community Review: Are you ready for a trip to Dead Island?

As a fan of most things zombie I had high hopes for the game, but was nervous. But now that I've played it I want more.

Thanks to Redbox I was able to pick this up for the PS3 and give it a try on the cheap.  Maybe you guys here at gouki.com can get hooked up with them. Okay onto the game.

The opening video starts with what must be GoukiJones having a beer and stumbling around the island.  It ends with a shot of Jack straight from the bottle.  Just incase you have never played a zombie game before be warned there will be tons of violence, blood, and foul language.  I do not suggest playing this one around the little ones.

When you start the game you get to choose between four different characters.  Logan the throwing expert, Purna the firearms expert, Xian the sharp weapon expert, and Sam B the blunt weapon expert.  I went with Xian.  When you select your character they tell you their story.  For her the short version sound a lot like Chun Li, dad was a cop, dad dies, she becomes a cop. 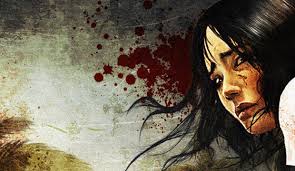 As you make your way out of the hotel you can loot most of the luggage that you see.  I make it to the balcony just in time to see the first bodies fall past.  As you gather items you start finding some odd stuff, a belt, some glue, I'm assuming you'll need this stuff later (you do, you use it to upgrade weapons).  When you make it down stairs be sure to check the dead bodies, that's where I found my first health kit.  Still no weapon yet though.  And then my first encounter with the undead.  Followed very shortly by my first death.  When I reloaded the last checkpoint I was surprised to see that I didn't have to re-loot the stuff on the way back to the zombies.  But you do lose some money.  Run fucker run.  And you get introduced to your first group of survivors.  And finally a weapon, even if it is just a boat paddle.  Works great for bashing in some zombie heads.  Now the fun starts.

You will earn XP and level up as you play.  This allows you to spend skill points to build your character.  The story tells you that there is a monsoon coming and you are immune to the zombie virus.  Time to go save the wold. lol.  But now you get your first quest and really start the game.  I end up finding a pair of brass knuckles to beat the hell out of zombies with, this shit is crazy.  Feel free to nut punch a zombie to death.  You will find all kinds of weapons and you can also punch and kick.  But be sure to take a few seconds and checkout the great scenery they put in for you.  Some of the views make you wonder how the hell we were all happy to be trapped in a house for pretty much the entire game.

The soundtrack is more about the creepy zombie sounds you get as a warning and ambient sounds like waves on the beach or birds in the jungle.  But the music they do through in is pretty decent.  Once you get into the lifeguard station you find your first workbench ( I missed one on the beach somewhere).  Repairing or upgrading will cost you some of the cash you have collected.  But to create weapons you need the blueprint for it, the parts, and some cash.

After you secure that base the survivors show up in a truck.  Thanks for the ride assholes.  And I almost forgot to mention you can skip the cut scenes.  I know that makes a difference to some of you.

Like any good anything/rpg you can talk to NPCs with decent voice acting and pick up new missions and items.  You'll earn XP, money, items, and weapons.

Eventually you can also get behind the wheel of a truck when you find one that runs and drive it right over the zombies.  The steering is alright but could be better.  Plus you drive from the wrong side of the car so I keep getting it the wrong door.  As the vehicle takes damage it begins to show.  You end up busting out the windshield and eventually the engine starts to smoke.  I haven't had one breakdown yet though.

You get a mini-map you can set locations on and find your way around.  I know it's helped me a ton already.  For an island you have a fairly open world to explore.  Some doors can be battered down even.  And multiple paths are everywhere you look.

I haven't got to try out the multi-player yet, but plan on a trip to my brother's tonight.  You can also do this online, but I don't want to be the noob who gets everyone killed so I'll wait a bit before going online.

I say Buy It.  If you are a zombie fan you will love this game.  I'm going to turn it back on right now as a matter of fact.  Don't be a jimmy!