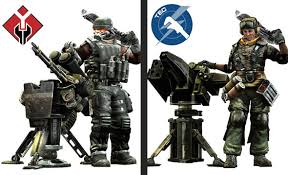 Basically the Engineer is one of the more underpowered classes in K3, but one team having one and the other not makes a huge difference. If you don't want to read all the details (because most of you don't own PS3 or just don't want to read), I have the basic information written up at the end ^_^

M224-1A LMG- Your basic machinegun. Tons of amo, long range, medium fire-speeds but extremely innacurate in far distance.
STA11 SMG- Way more acurate than the first gun and much faster firing speeds, but smaller clip and sucks even worse at far range, a definate medium range weapon.
STA3 LMG- The lord of all spraying and praying. EXTREMELY CLOSE range weapon that has shitty acurracy, but spills bullets out with an INSANE rate of fire. Run into a room with it and take out a group of jimmy's without even trying.

STA18 Pistol -  Run of the mile pistol that works at close range with a decent rate of fire. Should kill within 4-5 well placed shots.
VC8 Shotgun Pistol - Definately nowhere near as good as the shotty, far less range and damage, but it is still a one shot kill when your directly infront of someone.
STA2 Battle Pistol - Grenade Launcher aka "noob tube" for u CoD fans. Well its not nooby in this game, grenades bounch like a mofo but the weapon does shoot the nades extremely far and accurate ; very good vs campers.

Repair Tool – Repair damaged or destroyed ammunition dispensers, mounted guns, and automated turrets.
Repair Tool+  - Increases repair speed. (This is a MUST, the increased repair speed is insane and this is a fast-paced game, your gonna need it)
Repair Tool++  - Hack enemy placed turrets, transferring ownership until the engineer is killed or the turret is re-hacked. Stacks with previous abilities. (IMO this sucks ass. 9/10 your gonna die before you can just RUN UP to another engineers turret and hack it like your rambo, I haven't had much luck with this ability, but when I did, it allowed me to set up my own turret next to it.)

Sentry Turret  – Deploy a machine gun turret that will automatically target and fire at enemies in range.
Sentry Turret +  - Turret's firing rate is increase and can be deployed twice as fast as before.
Sentry Turret ++  - Deployed turrets can now track targets faster and are augmented with auto-fire rockets that fire every few seconds. ( LVL THIS SHIT UP AS FAST AS POSSIBLE! The Engineer felt like a struggle until the turret is fully lvled up, the turret dies too easily and its a sitting duck you the fire power is a must) 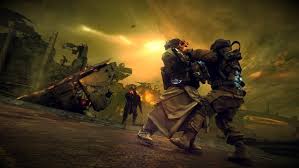 ENGINEERS ROLES IN THE TEAM / GAMEPLAY

The Engineer is your bro. Both teams have several amo crates that give you more grenades/mines than you spawn with and ofcourse more amo when you need it. You cannot use these unless a Engineer repeairs it (they are broken when the round starts) also if one team has a Engineer and the other doesn't, the one Engineer can destroy and take over the other teams amo deposits (or just capture them all in the start of the round). Before you go killing, Engineers need to repair the nearest Amo Depos.

Where and Why to use Turrets

The engineer ha several gameplay styles. To break it down we got the Camper, Aggresive and Security.

The Camper is self explanatory. Get your Turret in a corner while you wait in the other or next to it, firing at people coming near bye or outside. What makes it so effective is proximity mines. If you camp near a amo depo, you can have 3 mines constantly covering your blindspots and staircases, as soon as someone hits one you can constantly get more and more.

When your Aggresive (like me) you go out into the open, get your squishy turret (they do die easily) near a wall or crate giving you backup fire as you battle. It is effective because you can easily run back to heal him when injured. Also theirs MANY situations where I don't even notice a enemy but my Turret does, and I end up supporting him.

Security is great for your team. In almost any game-mode or objective while you go do your own thing, carefully place your Turret and proximity mines around the base/area.

Heres the fun part (not too much in-game) MATCHUPS! How us Engineer deal with other classes/ get railed.

Vs Engineer- Longe range, the engineer using the first primary weapon wins, its more inacurate than the second range weapon but the range usually wins overall, and the damage. Close range is a toughy. The last Primary weapon is best at close ranges, but the second one almost being as good and better acurracy, all comes down to the player. but even if its a small hallway, the second primary wins, the third is just TOO innacurate. Whoever have the better turret obviously have a much bigger hand.

Vs Infiltrator- This sucks. Infiltrators maxed out Hide ability allows them to appear as a teamate to you and yor turret. Ontop of that if they kill you with brutal melee, they stay hidden. Basically they seak up on you, brutal melee and your turret still doesnt see them, then they kill it. If they use a gun and are close enoguh, HOPEFULLY your turret turns around and fire a rocket first thing. The weapons matchup sucks aswell. Their primary eapon, an actual shotgun is way better than your pistol shotgun, and rapes you close range easily. They share the same secondary weapon as you but their last weapon makes the long range difference. A 5-burst red dot sight rifle, is way more superior than the engineers slow inacurate long range machine gun. Best thing you can do is be medium range while your turret is being a bro and helping you out, try to target them before they get close (it appears as red)

Vs Marksman - Marksman and Infiltrator are "top of the tier list" in a way. The marksman can be invisible while shooting at you, only appearing when killing or mortally wounding. So ofcourse when invisible, their turret can't see them, and if they do, the turrets slow ass moving rockets should be easy for a long range camper to dodge along with the turrets regular bullets. All of the marksmans weapons pwn you and the turret far/medium range. Your true only hope is close range or hopefully the machine gun pressure along with a turret causes their aim to fuck up. I'm pretty sure their final primary weapon kills turrets in one shot...a long with players.

Vs Tactition - Feels pretty equal. Tactition has a balanced weapon base with shotgun and rifles. The big upside tactition has is the ability to see players behind walls, BUT I don't beleive he can see Turrets. He will turn the corner ready to rape you, not knowing your buddy is ready to rape him.

Vs Tactitions Droid- It flies around and when it gets hurt sometimes flies away. This ofcourse makes it hard for your own turret to hit. But the droid ONLY shoots bullets, while your turret has bullets and rockets. One rocket should kill it, fire power is on your side. Also your machine gun takes down flying driods like cake.

Vs Medic- Medic is kinda lower on the list a long with Engineer. Your only real problem is the medic reviving and killing you from behind, but your turret may catch him before you even notice = win. The medic also has a shotgun, but without the abilities of infiltrator or tactition, it doens't always work out so well.

Vs Medics Droid- It follows the medic around shooting regular bullets like Taction droid, but its weak as balls. You or your turret can easily kill it. The only upside it has is staying alive and annoyinngly buzzing around when you kill medic.

The Engineer can play support with a strong Turret you can place in tactical areas and good weapons. The downside is fighting long range and cloaked classes. But if you want to camp with spamming mines and hiding in a corner with your turret in the other, that works too. The Engineer is also ideal for protecting assination Targets. On the forums this class has been protrayed as the "weakest" but the problem most people said is that the turret just needs a buff, its a sitting duck that dies easily(unlike the other 2 mobile droids), yet its the main part of playing engineer. Thank you very much for taking the time to read this, I might do a write-up on Infiltrator and Markmans and how to be a cheap douchebag, but most of you probably don't care about Killzone3. Heres a video of Engineer class PWNING shit (well, the enimies are barely aiming...whatever) Uplaoded by http://www.youtube.com/user/pixelenemy

Don't forget to leave a comment below and what you think of the game and my write-up, thanks guys