Welcome again to another session of Arthvader Fights. As usual, you'll be seeing some of my more recent Ranked Matches. This time, I've decided to return to using Remy, who I feel very comfortable in using as compared to most of the roster. I hope you enjoy watching these matches as I have in actually playing them.

A List of What's to Come This Week on Xbox Live

New week, another set of deal on the plate. Let's see what's available this week:

A List of what's to come this week on Xbox Live.

Thank you for the PAX Swag package, gouki.com

Special Package from Gouki.com. What could be inside...?

First of all, I have to say thank you, goukijones, for sending me this sweet package from PAX 2012. This package arrived about a week ago.

When I opened the package, at first, What I saw was a Magic the Gathering bag. when I open the bag to start taking the stuff out, I saw yet another bag (same one, mind you), and was able to get the swag out of that bag.  First of all, I definitely like the borderlands 2 shirt. now i have 3 different types of them (Crimson Raider, Skag crossing, and this new one). I also like the Injustice headband, which goes well with the Injustice T-Shirt that I got from the E3 swag bag. The Batman Arkham City concept art book was a nice adition to my collection (liked the game, of course). One of the more interesting things I saw within the package were some Magic the Gathering items, such as a coloring book w/ crayons for it, as well as a 30-card Red Planeswalker deck (I was kinda hoping for the blue deck, but after looking at the cards in the red deck, and learned how to play it, I was satisfied with the Red Deck). I've also noticed that I got some things that i already got from the E3 swag (mainly, the Ninteno Power issue). Among the rest of the swag (Halo Patch, Skullgirls Tattoo, PAX '12 Guide, Lanyards), laid a hidden game within the package. That game was Transformers: Revenge of the Fallen for the Xbox 360. I was surprised when I saw this game. I remembered playing the demo to it and had alot of fun in the multiplayer, destroying the opposition with Iron Hide in the train yard map. I was still surprised to see that there are some people who to this day, still play the multiplayer in it. I can expect to see this as a game I would go play around from time to time, destroying everyone for the fun of it. I will also at some point start playing the single player campaign, just so i could get more characters for multiplayer.

Once again, thank you, Gouki.com, for sending me this sweet package.

Back again with another set of Ranked matches in Third Strike. Now featuring the karate girl, Makoto.

Welcome all to another installment of Arthvader Fights. This time around, I've decied to do a couple of ranked matches using nothing but Makoto. I do have to say, though, even though it was hard for me to get some wins with her. I did at least had fun doing some of her combos during the matches. Expect to see some great action here.

A list of what's to come this week on Xbox Live

I see we're at the end of October, are we? Let's see what's coming out this week:

Welcome to another week of deals. Let's see what's out this week:

Back with more matches. This time featuring the raging demon himself, Akuma, A.K.A., GOUKI!!!

Once again, I've returned with more ranked matches from Street Fighter III: Third Strike. I decided to use the character whose name is the embodiment of this site, Gouki (Akuma in the US). Expect to see some great matches here.

A List of What's to come this week on Xbox Live

As usual, we begin a new week of Deals. Let's see what we got:

Here's a trailer introducing the Mechromancer with a bit of info coming from Sir Hammerlock himself.

Get ready for some plundering next week.

In an recent interview with the Associated Press, Gearbox President Randy Pitchford revealed the latest DLC expansion Captain Scarlett and her Pirate's Booty and announced that it will be released on Oct. 16. Players will be exploring a new area of Pandora, an expansive desert wasteland that was once a beautiful resort called Oasis, now a Bandit-filled Scanty town. Players will get to face new enemies, such as pirate bandits and sand worms, meet new characters, ride on the new sand skiff vehicle, collect a new currency called Seraph Crystals, battle new Raid Bosses, and embark on a journey to find Captain Scarlett's secret treasures. 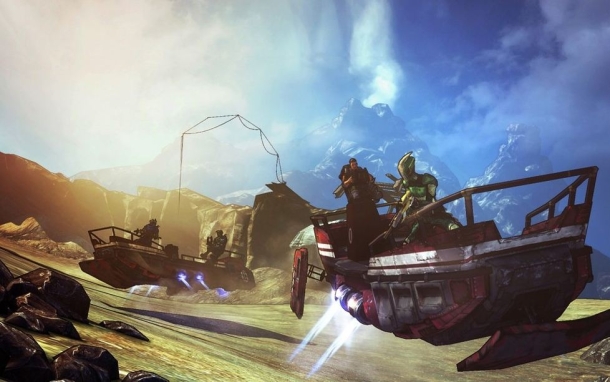 The DLC will be available for $10 when it gets released, or if you have the season pass (which is $30), then this DLC will come as part of the Pass.