The Japanese Super Street Fighter 4 development team posted a blog running down some of the abilities of Yang in the upcoming game, which was recently translated.

The release date for new costumes on home consoles has been announced. We put our all into making them, so please do enjoy these as well!

This time brings us the younger brother of the twins, Yang. I'd like to talk about his normal moves. 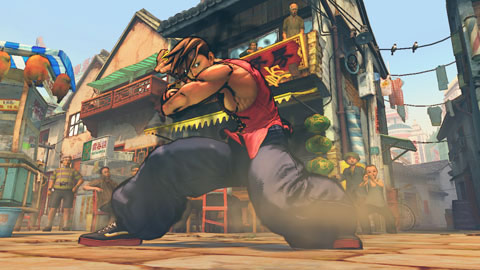 As in Street Fighter 3 Third Strike, his style is similar to Yun's. SSF4 Arcade Edition's tuning continues that approach.

He fights with quick attacks at short to medium range, stopping the enemy from acting with closely spaced strings. He is a character who pressures his opponent with a combination of strikes and grabs.

The potential of his short-range moves is extraordinarily high, so "how to get close to the opponent" should be an important point.

Since his debut, his stamina has been below average, so he cannot afford to take heavy damage. Please be cautious of this. 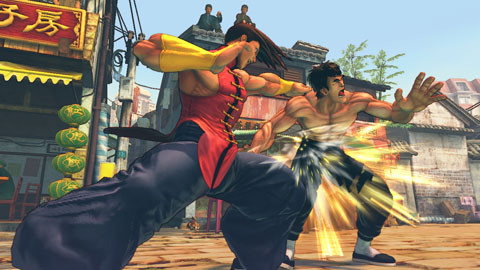 Like Yun, Yang has the same lineup of normal moves that he did in SFIII:3S.

From among those, I think I'll bring up a few for representative purposes.

It can be used as a poke, and leads to various combos on hit.

Close Medium Kick: like in SFIII:3S, connecting with this will put the opponent into a juggle state for follow-up damage.

Once again, it can be jump-canceled on hit or block in order to continue your offense.

Crouching Medium Kick is central to his offense, Yang's attack of choice.

Like in SFIII:3S, it is special-cancelable, comboing into Tourou Zan (Fist Slashes) for example. I think you will find quite a lot of chances to make use of this.

From long range, Yang can use Far Hard Punch as a poke. It takes a little while to extend, but you can aim to land some good hits at the fingertip area. 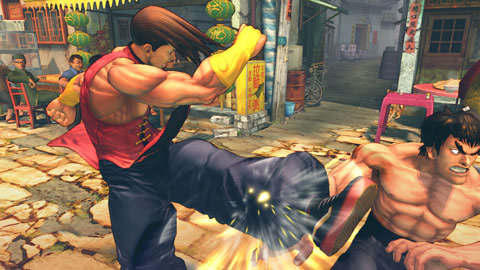 The position at which the twins can start a Dive Kick is similar to Rufus's dive - it won't come out at extremely low altitudes, but the Light, Medium, and Hard versions will descend at varying angles. You may want to make skilled use of these dives to take the fight to close quarters. Senpuukyaku (Whirlwind Leg) is an off-the-ground overhead move. You can use it to evade a low attack while scoring a hit. 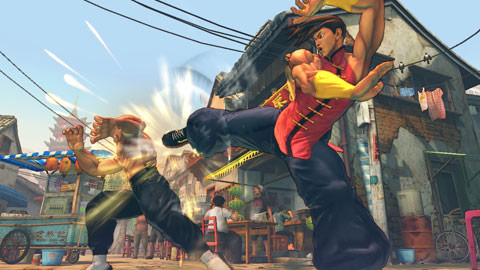 There are 3 target combos for Yang.

TC1 is a Target Combo from Towards-jump Medium kick.

If you use the two strikes skillfully to land a hit on an opponent below you, you'll earn some considerable frame advantage.

TC2 is common to both brothers.

The final hit, activated with Back + Hard Punch, is super-cancelable.

TC3 starts with a Light Kick, so since it comes out fast, there are many opportunities to use this Target Combo.

If all the hits are blocked, Hard Kick will push the opponent back a good distance, so it can be difficult for them to land a counterattack.

TC3 once more includes Standing Medium Kick, but in this game it can be jump canceled. Please look for the possibilities that come from this.

That's as far as I go this time.

Next time I'd like to focus on special moves.

Well, see you next week!