Win 1 of 3 copies of Street Fighter X Tekken Special Edition. Post a story on Gouki about which 2 fighters you're most interested in teaming up. Share your story. Winners will be selected based on creativity, votes, comments and total hits. US only. 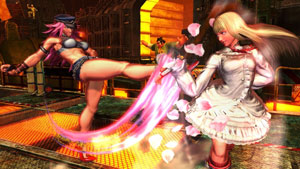 Street Fighter X Tekken Special Edition for the system of your choice. Xbox 360 or PS3.

-Included in the Special Edition.

The deadline to enter is Thursday March 1, 2012 and the winners will be announced Friday March 2. Winners will be notified via Gouki.com, Facebook & Twitter. You will know who won. Winners will receive an email with instructions on how to claim their copy of Street Fighter X Tekken.

What we're looking for is a short story about WHO & WHY you want to use any 2 specific characters in Street Fighter X Tekken. It could just be a 2 paragraph glorified comment for all we care, but you gotta take the time to post a story on Gouki.com. Read the Faq, your story must be approved. You can submit as many entries as you want, but they must be separate stories.

Your story title must make sense and mention either the characters your writing about or Street Fighter X Tekken. Also tag your story "sfxt giveaway"

This is a giveaway and Gouki.com reserves all rights. Rules, prizes & this story subject to change at anytime. Anybody abusing anything on Gouki.com will be banned immediately. We run a fair and legitimate operation here. Don't be a Jimmy. Thanks for playing.

Help us get the word out! Please Favorite and ReTweet this.