In what will be the first of a new set of stories I will do, I will discus my most recent import game in my library of Xbox 360 games. So, I recently managed to get my hands on Mushihime-sama Futari, a maniac shooting game from CAVE, a company known for making some of the more crazier shooters we might or might not know, such as Guwange (available in the XBL Marketplace in the Arcade area), Deathsmiles (Published here by Aksys games), . Could this game be worth your money? Let's find out, shall we.

First off, you may be wondering, why am I talking about a game that is only in Japan? Simple, and the first reason why I would recommend it. Truth is, This is one of the few Japanese xbox 360 games that just so happens to be Region-Free, meaning that this game could be played on any xbox 360 unit. 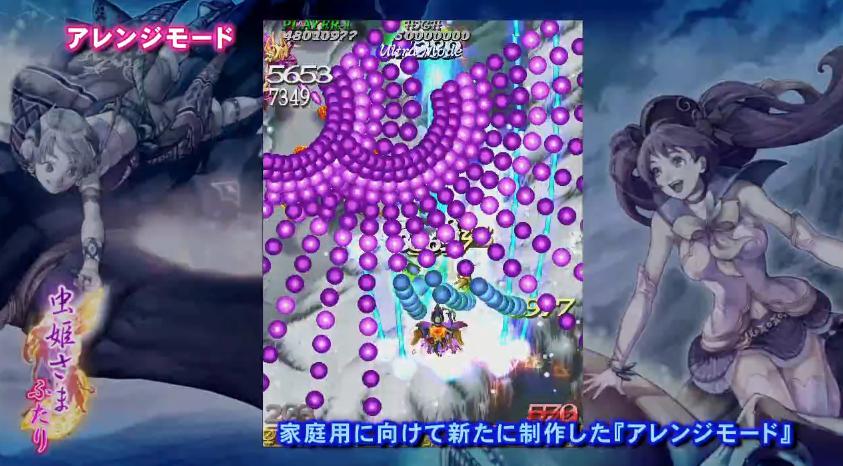 When you boot up the game, you are given a choice between Ver. 1.5 or Arrange, both of which offers the players a different type of challenge. there is also a DLC pack in which will enable the player to play the Black Label version, which is even more challenging.

When it comes to the actual gameplay, you will need to take into consideration that this is a vertical shump (shoot em' up). in most of the modes in the game, you pretty much use two buttons: a fire button, and a bomb button. there are two types of firing: rapid-fire firing, and auto firing. you do the rapid-fire shooting by spamming on the firing button, while with auto firing, you simply hold the button down. Do note that these two shots are different from each other. you normally have 3 bombs on you, and when you die, if you have used any bombs, it will restock to 3. the bombs can be used in many ways, especially if you think you can't dodge a series of bullets on the screen that looks impossible to dodge. As far as the music and graphics goes, it's really amazing. the soundtrack makes it feel so satisfying as you dodge tons of bullets and wreaking havoc upon your enemies. when it comes to the graphics,  the art style just simply looks awesome, from the smallest details of the levels, to the many enemies, to even the smallest of bullets that spread all over the field. the cool thing is that you can even change your wallpaper to i think around 14 different varieties.

So, in the end, is this game worth getting? If you're the type of person who likes Old-School shump's, but at the same time want a real hard, and maybe painful challenge, then I would definitely recommend it. the best chance for you to probably find this game would be on Ebay, Amazon, or any import gaming sites.

Before I go, here's some gameplay footage:

Tell me what you think. Leave your comments in the bottom, vote, and don't be a Jimmy!!!!