What’s going on with Gouki.com? Final Fantasy XIV Stormblood is, that’s what’s up. Here’s my review…

I love it.  I’ve been playing it non-stop since the release.  The game is a lot of fun, I highly recommend you giving it a shot.  You can play up to level 35 for free now.  If you do choose to give it a try make sure you get in the Primal servers and join the Malboro world.  That’s where I am, with Sugar Ninja and Bat Rastered.  Come join our Free Company -AKA A Guild- Kefka. 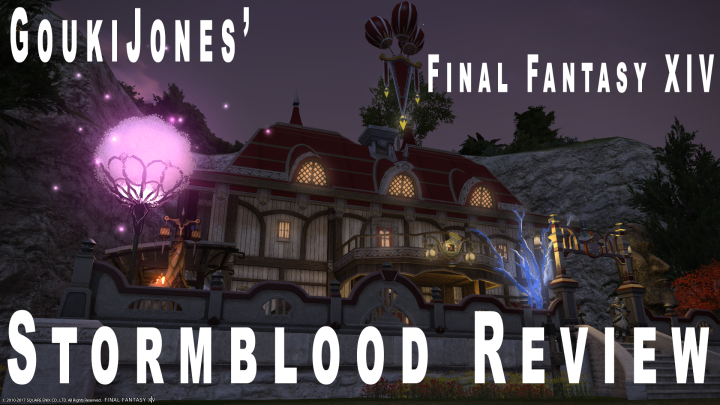 Yes, we are named after the Final Fantasy VI Villain with the famous laugh.  Kefka was a ruthless villain, bent on the destruction of everything.  We’re kinda the opposite of that.  Personally, I get more out of gathering and crafting in the game than I do the savage raids.  I was traumatized back in the 2.0 days damn it!

I enjoyed gathering so much in the 2.0 version of this game (A Realm Reborn) that I convinced Bat Rastered to create a website for us just about gathering.  Check it out, it’s MasterDotL.com.  I recently just checked every node on the website for the 4.0 patch.  Please message me if I missed anything.

So when you sign up and get on Malboro, send me a message.  In-game I’m Avitas Sibannac.  I play a female giant character.  I played the tiny little Jimmys in FFXI and I didn’t want to play another character that I couldn’t see.  Now I can definitely see the gear.  And so can everybody else.  I tower over most people in the game.  Yes, I’m a chick in the game.  I tried playing a male character and I just don't want to hear a dude grunting all the time.  Hella grunting in FFXIV, trust me.

I’m the head Jimmy in Kefka, it was a position pushed on me way back when our first FC that we were a part of didn’t work out.  When we left Estrada was like ‘Hey Jimmy, go start a new FC for us.’  And I did.  I named it Kefka and here we are.  FYI the FC is named Dancing Mad and the call sign is Kefka, but everybody refers to us as Kefka.  Kekfa was founded on February 24, 2014.  We currently have 26 active members.

We have a beautiful house in the Mist.

Our gardens are managed by Sugar Ninja and we have an ever ready supply of everything you need to get started with anything in FFXIV.  From leveling your Chocobos to taking rides out to Diadem.  Not that anybody does that right now.

We run the Lost Canals of Unzair every Saturday with FC members.  This is a 7-floor treasure hunt raid, where you just clear rooms of enemies for loot.  Last week we cleared the 7th floor.  Check out the video.


Thanks for reading.  I hope you decide to play Final Fantasy XIV.  We’d love to have you.