I'm back with another entry about Import games. This time, I'll be talking about the Yu Yu Hakusho Games that were on the Super Famicon. 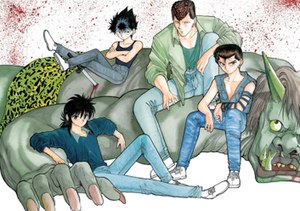 I've personally have been a fan of Yu Yu Hakusho for years now, and I figured it's time for me to talk about the four Yu Yu Hakusho games that were on the Super Famicon (I own three of them).

This is the first Yu Yu Hakusho game to be released on the SFC, and I have to say, one of the more unusual games I've played. First of all, this game is considered as a simulation fighter. You attack by holding one direction and pressing a button. Depending on what button you press, you can end up blocking, punching, or even using a special attack. If you were able to deliver a hit with your attack, you'll be able to gain orbs in which you can apply to your spirit or energy meter in order to do a spirit or energy attack. At first, the gameplay may seem confusing, but overtime, you will get used to it. The story mode in this game pretty much covers events from the beginning, leading up to the final battle of the Dark Tournament. The unique thing about the story mode is that there's a  password system. With this password system, you can resume from the last fight you were in. you also use the password in the versus mode to use the characters you have unlocked in the story mode up to your current point. in the Versus mode, you can fight 1-on-1, or battle it out in team battle. Overall, I think of this game as  unique fighter.

Here's footage of the first fight in the story mode: Changing from the gameplay of the first Yu Yu Hakusho game, Yu Yu Hakusho 2 is a more, traditional 2D fighter with a total of 10 characters (14 if you include the different versions of Genkai and the Younger Toguro.) The game has four modes available: Story, Arcade, Versus, and Training. In the Story mode, you play through from the beginning of the story, up to the final battle of the dark tournament. At first, you'll only be able to use Yuskue (who starts off with pretty much no spirit moves, but gains his moves progressively just like the anime), but as you progress through, you'll be joined along with Kuwabara, Kurama, Hiei, and Genkai. Arcade Mode is the standard mode, in which you just fight a gauntlet of opponents in random order. the versus and training mode is self-explanatory. As for the music, I was impressed with the themes for the characters/stages. The game also features 8 stages, each stage based of a major part of the anime up to the Dark tournament:

This is one of my more favorite yu yu hakusho games that were out on the Super Famicon. I pretty much consider this as the Special edition of the first Yū Yū Hakusho game. the only difference is that it pretty much removed the story mode, five of the characters being replaced by four characters from the chapter black arc, as well as a random select. Even the battle mechanics were changed a bit from the first game. I can't describe much more of it since this is the one Yu Yu Hakusho game on the SFC that I don't have, yet. I consider this to be my most favorite Yu Yu Hakusho games that was out on the Super Famicon. Being faster paced then Yu Yu Hakusho 2, Final brings out some of the best balance, tuning, and features to be shown. It has six mode that you could play through (Story, Makai Tournament, Arcade, Versus, Team Battle, and Training). In the Story Mode, you can play as either Yuskue, Kurama, Kuwabara, or Hiei. The Story Mode covers the final battle against Sensui, and then goes through the final Arc (which, of course is the Makai Tournament, even though Kuwabara has the shortest story, in which his ends after the battle with Sensui). In the Makai Tournament, you fight a series of opponents tournament style, trying to making it to the end without losing. The arcade mode is pretty much you standard arcade mode, in which you fight all the opponents in random orders. With Team Battle mode, which 1 or two players can participate in, chooses a team of 4 characters to fight in the team battle format. The game features a very well balance of characters, with a total of 13 characters (14 if you include Yakumo from the Poltergeist Report OVA). the game also features 6 stages based off from the final two story arcs from the anime, as well as some really good music.

Here's a quick video for this game, showing some advanced combos:

If you're as much as a fan of Yu Yu Hakusho as much as I am, and you know a way to play super Famicon games (other than emulators), then I would recommend buying these games. I believe they go for pretty cheap on ebay.

What do you think of this import corner? Leave your comments down in the bottom. Don't forget to vote and share, and Don't be a Jimmy!!